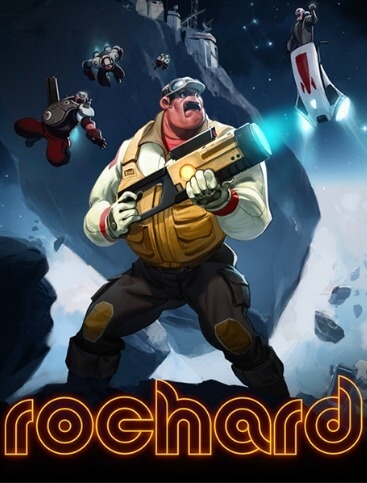 Rochard is a science fiction platform game available for the PlayStation 3 through the PlayStation Network, for Microsoft Windows, Linux and Mac OS X through the Steam online distribution platform, and for Linux as part of the Humble Indie Bundle 6. Developed by Recoil Games, the game revolves around the manipulation of gravity and the use of a G-Lifter, a gravity device used to easily move heavy objects around. The title combines increasingly challenging environmental puzzles with action, humor and a story of rich twists.

The game's launch dates for the PlayStation Network were September 27, 2011 in the US and September 28, 2011 in Europe. The worldwide Steam launch of the Windows version took place on November 15 of the same year.

Rochard is a two-dimensional side-scrolling platformer taking place in three-dimensional scenes. The player character works his way through a series of environments, each containing a mix of puzzle and combat encounters. To overcome these challenges, the player has access to several tools and mechanics that relate to gravity, weight and matter properties.

The player is equipped with the G-Lifter – a modular mining tool hosting various subsystems like a remote gravity controller, a flashlight, a communication device and the following main features. When the gravity beam mode is selected it allows John to grab and shoot or drop certain objects like crates, explosives containers etc. With the gravity beam John can also manipulate and move certain objects, like big mining lasers, cargo containers etc. After an upgrade the G-Beam is powerful enough to lift John in low G allowing him to dangle and swing from certain objects. All objects which can be manipulated with the gravity beam are highlighted with a white swipe effect on the surface. The player gets to upgrade the gravity beam several times to gain new abilities to it. In addition to the G-Swing the player can use the G-Beam as a weapon against flying droids, automated turrets and even human enemies (respectively).

Fuses are used to control power on certain electrically powered items. The controlled item is attached to a fuse socket with a thick visible cable. The player can control the power on the item by attaching or detaching the fuse to/from the socket. The fuses cannot be physically damaged but they can be disabled temporarily by shooting at them or using explosives on them.

John Rochard, leader of the lowest producing team of astro-miners the Skyrig Corporation ever employed, accidentally discovers an ancient structure hidden deep in an asteroid. Soon afterwards, John’s team goes missing without a trace and he finds himself stranded on the asteroid and under attack by space bandits. John quickly realizes that dangerous forces are at work, determined to use the discovery for their own sinister means.

As the supposed reinforcements of his boss Maximillian arrive, it is revealed that they are in league with the space bandits. Fighting his way down through the tunnels to get to his trapped team mates Skyler and Zander. As John reaches them, Zander succumbs to his wounds, sending both Skyler and John on a path to uncover the mystery surrounding their recent find and to avenge their fallen colleague. The ancient structure turns out to be an alien temple, containing Native American glyphs. Unable to read the engravings, John and Skyler decide to head for Floyd, Skyler's uncle, whose Native American roots might help them make sense of it all.

Upon arriving on the seemingly deserted asteroid-based casino, John heads to Floyd’s office. It turns out the space bandits have taken over the casino and John has to fight his way to the office which is found vacant. Skyler suggests John to head to the money vault, where Floyd might have barricaded himself. Upon finding Floyd, John is told about an ancient legend of Native American Indians and the Katsina statues that grant its user divine powers. It is revealed that he has to get a decoder disc from his boss’s office, located in the Skyrig headquarters, to be able to find the real Katsina temple. John fights his way to meet Skyler in an abandoned hangar, from where they take off to the Skyrig headquarters.

John infiltrates the headquarters using ventilation shafts and other back doors, avoiding security cameras while sneaking his way towards his boss’ office. Once presence is noticed, he has to fight his way to the office, where he finds the decoder ring that can be used to decipher the strange writings at the alien temple. John escapes the office and battles his way past sky police and their combat droids to reach a secluded cargo hangar. Skyler picks up John and they head back to the mining asteroid.

The pirates have trashed the place so John decides to take an alternate route to the alien temple. After fighting an army of droids and turrets, John has to use a huge mining laser to get into the alien temple. At the temple he finds out that the decoder ring is actually a power source, which makes the strange markings on the walls glow. A large star map is revealed pointing to the Casino Asteroid they visited earlier. Sky police have found John and Skyler and they get separated. John has to find an alternative way to the hangar. When John gets there he finds Skyler captured by the space police and his ship being blown up. He decides to use an old race bird “Switchblade” to pursue the sky police and Skyler to the casino.