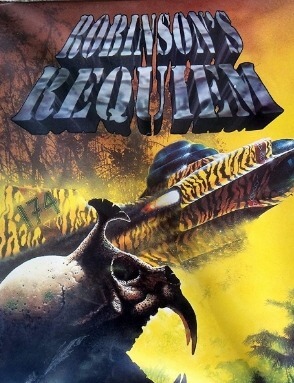 Robinson's Requiem is a 1994 survival simulation video game developed and originally published by Silmarils exclusively in Europe for the Atari ST, Atari Falcon and Amiga. Taking place in the 22nd century where Earth and colonized planets are facing overpopulation, players assume the role of Robinson officer Trepliev 1 from the Alien World Exploration department in his attempt to escape imprisonment from the fictional planet of Zarathustra alongside another AWE Robinson named Nina1, while facing several hostile creatures and dangers in order to survive.

Robinson's Requiem was developed in conjunction with Ishar 3: The Seven Gates of Infinity and made use of Silmarils' proprietary ALIS game engine. Though it was initially released for the Atari ST, Atari Falcon and Amiga microcomputer platforms, the game was later ported to other home computers and consoles including the PC, Macintosh, 3DO Interactive Multiplayer and Atari Jaguar CD, some of which were released by several publishers across multiple regions and with each one featuring several changes and additions compared to the original versions. The 3DO version was originally announced for a February 1995 release by ReadySoft but due to extensive delays, it was not released until 1996, becoming one of the last games released for the system. The Jaguar CD port was developed and completed but cancelled until it finally received a homebrew release in 2011 by Songbird Productions. A conversion for the Amiga CD32 was also planned but never released.

Robinson's Requiem has been met with mixed reception from critics and reviewers alike since its initial release. The Atari ST and Atari Falcon versions received praised for their presentation, graphics, sound design and gameplay but received criticism for being difficult to newcomers, slow pacing and steep learning curve. Similarly, the Amiga version garnered praise for its graphics, sound and gameplay but was criticized by some for the low framerate and difficulty cuve. The PC versions were met with a more divisive reception from video game magazines and dedicated outlets who felt divided in regards to several aspects, including the level of complexity and difficulty for players. A sequel, Deus, was released in December 1996 only on PC. It has since been re-released on compilations for modern PC platforms through download services such as Good Old Games.

Robinson's Requiem is a survival simulation game, similar to Wilderness: A Survival Adventure and UnReal World, that takes place from a first-person perspective where players assume the role of Robinson officer Trepliev 1 from the Alien World Exploration department in his attempt to escape from the prison planet Zarathustra alongside another AWE Robinson named Nina1 as the main objective, while facing several hostile creatures and dangers in order to survive the planet's hostile alien environment long enough. The players use the game's systems to monitor the Trepliev 1's health status, perform surgery and create makeshift tools. Players must also keep track of hunger, thirst, and fatigue temperature in addition to their character's health, which is displayed on its dedicated screen and multiple statuses are shown depending on the actions taken during gameplay. Many actions require the accomplishment of "every day" tasks such as eating, drinking, and sleeping, as well as hunting, cooking, gathering, and finding a place to rest. The player uses a freely movable mouse cursor to interact with the environment and with the icon-based interface on the heads-up display (HUD) when not engaged in combat.

Robinson's Requiem takes place in the year 2163, where Earth and colonized planets are facing overpopulation by humans. A military force known as the Alien World Exploration (AWE) and its Robinsons explore potential planets across the universe that are suitable for colonization, requiring a rigorous training process and their task lasts for five years until their mandate is finished. However, a secret service organization known as Scientific Intelligence (SI) issued orders that certain Robinsons cannot return to Earth in order to avoid foreign viruses but officer Trepliev 1 and other Robinsons eventually discover the organization's actions. Trepliev 1 and his crew are tasked with exploring an unknown planet as their last mission before retiring but the team's spacecraft was sabotaged to crash-land on the location, which is revealed to be a prison planet called Zarathustra.

Critical reception of Robinson's Requiem was mixed. Many reviewers noted its poor graphics and high system requirements, and some found the game to be boring. However, several critics, including those from CU Amiga and Amiga Computing, believed that the game's originality overrode other complaints.

CU Amiga's Tony Dillon was impressed by its freeform item combination system, but was disappointed by the Amiga version's graphics and performance. However, he finished his review by saying, "If you want something new that will completely blow your brain, then this could well be the game for you". Jonathan Maddock of Amiga Computing also disliked the game's graphics and system requirements, but praised the game as "an entirely new gaming experience". Amiga Format's Dale Bradford noted that "just wandering around, exploring and discovering how long you can stay alive is enjoyable, thanks to the non-linear gameplay", and to the "care and thought" that went into the game. All three reviewers noted the game's high level of difficulty.

Rich Pelley of Amiga Power, however, found the game to be extremely boring; he likened playing it to "being told to paint a fence and ... discovering that it's fifteen miles long". He also criticized its graphics and performance, and noted that the game's survival systems amounted to "lots of bars and charts and electrocardiograms, and not much action". The game also received poor reviews from both PC Gamer UK and PC Gamer US, who found the game frustrating and uninviting, and criticized its graphics.