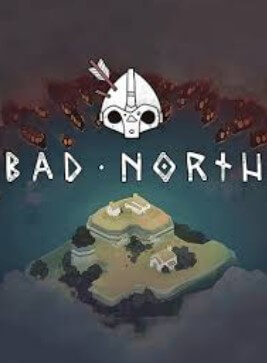 Bad North is a real-time strategy video game developed by Plausible Concept (a game studio in Malmö, Sweden, founded by Oskar Stålberg and Richard Meredith) and published by Raw Fury. The game was released on August 28, 2018 for the Nintendo Switch, PlayStation 4 and Xbox One. A Microsoft Windows version was also released on November 16, 2018.

Bad North focuses on real time tactics (RTT) game play, having two game modes: normal and hard mode. The main goal is to defend the kingdom from the attackin Viking invaders who killed the king, and to guide the island’s people to evacuate. Islands have different layouts so each poses a different challenge. They are divided into multiple tiles and have houses, with Vikings attacking from any corner, so the player's strategy must be well planned to get the opportunity to save the people from the enemy by protecting the houses. The Viking invaders will chuck torches into the houses, and if they burn completely the player will not earn coins for those houses. Gold is needed to get upgrades for units and level up commanders' defenses. The player can also pick up items (represented as question marks in the map) and add new commanders to the Army.

Commanders: are the most important characters in the units. They are insusceptible so long as at least one unit is under their command. They can also be granted items, and as such give advantages or new skills to units. Nevertheless, if the commander is separated while performing a Recover and killed the unit is considerate killed too.

Militia: are the lowest type of units, also weak against majority enemy units. However, they perform well enough against Archers and Recruits.

Infantry: are promoted Recruits (Militia) and convenient for offensive and defensive maneuvers. Their main goal is to defend the unit against the enemy attacks.

Pikes: are the second type of melee unit class. They perform against any type of melee enemy, as long as they are still. However, they cannot fight at all if they are currently moving, even while being engaged.

Archers: are the weakest of melee units, but suitable for using behind allied melee units or attacking at a distance. Also capable of attacking from elevated positions.

Ring of command: Given to commanders to increase the total number of soldiers in the unit.

War Horn: Can only be used once per island. It gives the commanders the ability to immediately call soldiers from a house.

Bomb: Explosive that can be thrown in a battle. It is very powerful to kill the enemy for longer amount of time than Warhammer.

Warhammer: used for clearing large groups of foes. It can be given to Commanders to drown the enemy units. However it can only be used on same height as targets contrary to Bombs.

Bad North was developed by Plausible Concept (Company that was created by Oskar Stålberg formerlly technical artist at Ubisoft) in 28 August 201 for Nintendo Switch, PlayStation 4 and Xbox One.

Patch 1.01 version of the game was released on September 4, 2018 with new updates to fix a severe frame rate drop that affected Campaign Map, Upgrade Menu, Squad Selection and the Coin Assignment.

Patch 1.02 and Patch 1.03 are updated versions respectively released on September 12, 2018  and September 26, 2018  bringing numerous bug fixes along with a couple of user interface improvements and balance updates.