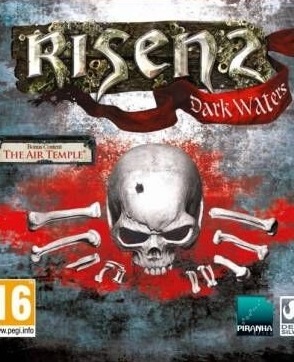 The game was officially announced by Deep Silver on August 18, 2010, during a press conference at the GamesCom exhibition of Cologne. The official site was opened on February 19, 2011. The game was released for Microsoft Windows in Europe and the United States at the end of April 2012 and for Xbox 360 and PlayStation 3 platforms in the late summer of 2012. The PC version is directly developed by Piranha Bytes. The French firm Wizarbox is in charge of the console versions for both the Xbox 360 and the PlayStation 3. Risen 2: Dark Waters is the first Risen game to be made for the PlayStation 3.

Risen 2 is an action role-playing game where players take control of the main character in a third-person perspective to explore the in-game world, complete quests and customize their character's abilities. While the physical appearance of the player character cannot be changed, other characteristics including clothing and skill sets can. Throughout progression of the game, players can improve five key attributes, each with their own focus on different styles of gameplay. The "Blades" attribute determines proficiency and use of swords, daggers, throwing weapons and other slashing/thrusting weaponry while "Firearms" revolves on pistols, rifles and other gunpowder based weaponry. "Toughness" determines the level of which damage that can be taken from different attacks while "Cunning" focuses on stealth including sneaking, thievery and persuading other characters. The final attribute is "Voodoo" that revolves around the use of black magic and other rituals both lethal and non-lethal that can be utilized throughout play. Each attribute covers many multiple sub-classes for each known as Talents, which are skills that represent different perks and abilities.

Talents are more specific in their benefit depending on the level of them. For examples, under Cunning, "Thievery" determines whether a player can pick certain locks or pickpocket characters while under Toughness, resistance to blades or bullets is determined along with the ability to intimidate other characters. Because of the variety, players can choose to focus on different attributes and talents depending on their approach to gameplay, such as stealth, magic, dirty tricks or conventional combat.

Attributes, along with their respective talents are leveled up by spending a specific amount of "Glory". Glory is gained by the player through completing quests, discovering new locations and defeating enemies. Individual talents however can also be leveled up through the use of certain items, some with permanent or only temporary boosts. This is additional to different interchangeable items of clothing and jewelry, each with their own talent improvements and levels of defense. Certain other skills can also be learned by receiving lessons and advice from skill specific trainer characters found throughout the game world. Each skill/talent however requires a certain level attribute to already be met while also often at times an amount of in-game gold to be given. Like glory, gold is accumulated through progression while also through selling items to vendors who can also sell items at the same time. Trainer skills include useful abilities such as kicking over opponents, training monkeys and parrots to steal and distract foes, along with alchemy, gunsmithing and forging that allows the players to create talents boosting potions and new weapons made from materials found or bought throughout the game. Other abilities include the use of a voodoo doll to take direct control of other characters or rituals to weaken opponents.

In combat, the player character has two weapon slots. In the right hand the player wields their bladed weapons such as a cutlass or a two-handed rifle while in the left hand is the secondary item such as a pistol or non-damaging items like throwing sand to blind opponents or trained wildlife. Weapons can be switched quickly or items like health provisions can be used through a separate tab of hot keys on the PC version. Throwing weapons like spears however requiring aiming with both hands.

The game is set in a fictional, fantasy-orientated region of its in-game world that is based on the Caribbean tropics. The world is divided up into multiple locations across a fictional world map made up of islands (or coastal areas) home to jungles, caves, tribal villages and outposts. Each location can only be accessed for the first time through progression of the main story quest yet can be revisited at a later time, now being optional for the player. Travel between islands is done with the player's pirate ship. When visiting each location, the region is near open for the player to explore. While certain routes and paths may be divided by mountainous or watery passes or story scripted events, the location allows the player to take multiple routes and discover new, even hidden sites or locales. The player must travel on foot through most of the locations but can obtain a map of it that shows a complete overview of the island, including marked points related to current quests and if discovered points of interest. Points of interest typically include villages, outposts, docks and other safe non-hostile areas. Once these have been discovered and marked on the map, the player can then fast travel between them without having to manually go on foot. The game has a day and night cycle which non-player characters and in some cases certain quests operate by so for example stores will be closed and some characters may be sleeping during the evening. Players themselves can choose to sleep if they find an empty bed to skip to different times of the day. When around most non-hostile characters, the player must not draw their weapons (unless required) unless they flee or act aggressively themselves. Players can also travel with an AI controlled companion that will aid in combat and questing, some of which have their own unique abilities that can benefit the player character.