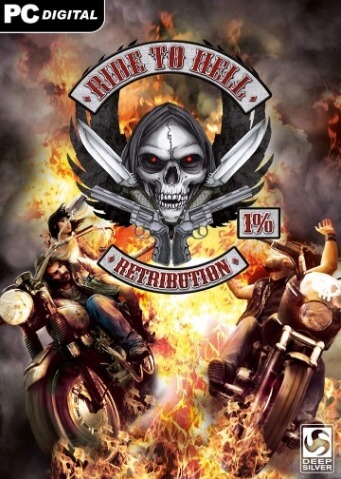 Ride to Hell: Retribution is an action-adventure game developed by Eutechnyx and published by Deep Silver. It was released for Microsoft Windows, PlayStation 3 and Xbox 360.

Ride to Hell has been critically panned to the point where it is considered one of the worst video games ever, with very low review scores by Metacritic and GameRankings. Upon its release, the game was criticized for broken and repetitive gameplay, poor controls, dated graphics, voice acting, writing, poor artificial intelligence, awkward sex scenes, offensive portrayal of women, numerous bugs and glitches, and dropping the originally planned open-world concept in favour of a linear layout.

In 1969, Vietnam veteran Jake Conway returns home to his family of plains bikers, which include his uncle Mack and brother Mikey. Mikey has grown distant from his brother and shows disdain to his uncle, but is infatuated with his college friend and tutor, Ellie, who likes bands. Mikey leaves angered when Mack refuses to allow him to go to a concert with Ellie. Mack sends Jake after him, and after consoling, they go to a diner. Outside, Mikey is confronted by The Devil's Hand bike gang. Jake intervenes as Devil's Hand member Colt notices Mikey's jacket, causing a chase. The Devil's Hand hold the brothers at gunpoint, demanding to know where they got the jacket, until Meathook threatens Mikey with a knife. Mikey says the original wearer of the jacket was his and Jake's father, William Conway (whom Meathook recognizes as "Toledo" Conway). Meathook slits Mikey's throat, and as Jake mourns his brother he is shot and left for dead by Colt.

Jake survives the bullet wound and is patched up by Mack. Jake swears vengeance on the Devil's Hand, and goes hunting the bikers one by one. Mack helps Jake get to Anvil, who is revealed to be in San Alfonso, where he escapes after being discovered. Jake then goes to Army Officer Tyrell, who gives him weapons after proving himself. Anvil ambushes Mack and Jake but escapes after they deal with his henchman. Jake hunts down Anvil and kills him. Ellie contacts Jake and tells him about Dr. Blotter, who does dealings with Colt. Blotter sends him to Fogwood to meet with Colt's lover, Naomi. In Fogwood, Jake saves Naomi from Bar Loggers, the two have sex, and she later gives him Colt's location - Seven Wells Ranch.

Killing bikers, thugs and policemen, Jake enters the Ranch but is subdued when he shoots fuel canisters, leading Colt to escape to Airplane Cemetery. Jake makes it to the Cemetery, kills Colt before telling him to remember Mikey's name. Jake then heads to Greasy Steve and Meathook at a boxing ring. Jake fights the four competitors: Bullsye, Ace, Selvan the Destroyer and Meathook himself. Jake wins all fights and interrogates Meathook, but is stopped when Greasy Steve kills Meathook, leaving to speak to Triple 6. Jake hunts down Greasy Steve, leading him to a death race where the two battle. Jake wins and interrogates him, getting information on their leader, Pretty Boy. Jake leaves Steve to explode with his C4. Triple 6 confronts Jake to kill him, but Mack ambushes the Devil's Hands as Jake deals with the bikers, and Triple 6 escapes the scene.

Ellie reveals that Triple 6 (Damien Silver)'s location is in Fogwood Silverfalls Sawmill with his family. Jake later kills Triple 6 as he helps a lumberjack and prostitutes find Pretty Boy, leading him to King Dick. Going to King Dick's Church, Jake kills his henchman and interrogates him for Pretty Boy's location. King Dick tells him to find Brandy; he also tells of their leader, Caesar, who wanted to hunt him down due to his father. Jake drowns King Dick in a baptismal fountain and leaves to find Brandy. Brandy asks Jake to win a race and get Orson's bike down in Bergenstock mines for him to get paid. Jake gets the bike and goes to Tyrell for explosives. Brandy takes the bike to Pretty Boy as Jake and Mack intercept them, leading to Pretty Boy being captured by them. During his interrogation, Pretty Boy tells that his father is dead and that there's been a kill order on him and his family.

The player controls Jake Conway from a third-person perspective. The game's levels generally begin with a motorcycle driving segment in which only forward movement is allowed and obstacles must be avoided by using ramps and powerslides. Impacts and collisions lead to either a checkpoint reset (the screen fades and the player is sent backwards to the last clear stretch of road) or death. Combat can also occur in these segments, consisting of quick-time event melee attacks, shooting from a sidecar while an AI companion drives, or getting close enough to allow an AI companion to shoot.

The main levels generally consist of a mixture of third-person, cover-based shooter and beat-'em-up gameplay. These levels are linear, usually guarded by several lower level enemies with a high ranking Devil's Hand member serving as the boss enemy at the end. The player can use a variety of guns and melee weapons, as well as throwing knives and dynamite. Unarmed combat actions include guard breaking, countering enemy attacks, context kills with environmental objects, and a quick-time event based on instant takedowns. Weapons and ammunition can be scavenged from defeated enemies.

Between levels, the player can roam a small section of Dead End to sell drugs and buy weapons, moves, and motorcycle customization. Notably, despite a large amount of the city being modelled and detailed, any attempts to exit the small playable section results in a fade-reset similar to that of the driving segments. Also notable is that civilian NPCs are animated, but cannot be spoken to or killed, despite the game's warning against harming such NPCs.