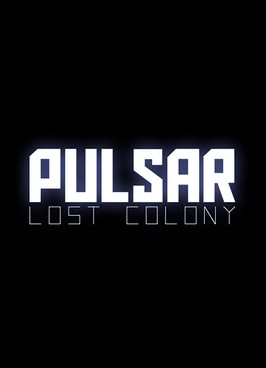 PULSAR: Lost Colony is a science fiction space exploration video game being developed by independent developers Leafy Games, LLC. The video game was greenlit on Steam Greenlight on October 3, 2013, and was later funded successfully on Kickstarter on October 31, 2013. The game was released in an Alpha state on February 25, 2014.

PULSAR: Lost Colony is a game about space exploration, in which a procedurally generated galaxy is created with a ship of the player's choice. They may warp to several systems and upgrade/repair their ship when encountering a system with a trading post. Combat is also in this game, as the player can attack and board enemy ships. There are several classes to choose from in this game such as: Captain, Pilot, Engineer, Scientist, and Weapons Officer. The game has a single-player and multiplayer available, both modes are exactly the same as it is now. Multiplayer is mainly co-op as you can play with your friends and cooperatively destroy enemy ships,  beam down to planets, and board enemy ships.

This game includes three playable factions: The Colonial Union, W.D. Corporation, and The Alliance of Gentlemen. In the future, two other factions will be added, the Fluffy Biscuit Company and a "secret faction" known as the Polytechnic Federation. For each playable faction one type ship is available, the Intrepid, W.D. Cruiser, and the Stargazer. Each ship has its own strengths and weaknesses. The developers plan to tie in the factions with the story.

On July 2012, Leafy Games, LLC was created. Shortly after the founding of the indie studio they started their first project, PULSAR: Lost Colony, after several attempts at prototypes for a new game. They released their first development log or "devlog" on their Official YouTube Channel on August 2, 2013 titled "PULSAR: Lost Colony - Video Devlog #0" which marked their first public showcase of the game. Since then they have updated the game several times with new features. They have added features for each station for the roles of Captain, Engineer, Scientist, and Weapons Officer such as: commands delivered by the Captain to the players/bots, ship cores which must be monitored at all times by the Engineer, and viruses/scans delivered by the scientist, and new weapons/turrets have been added to ships. The developers have also added new ships to the game, and planets. The game is scheduled to go into Beta later this year as the game is now in Pre-Beta.

Following the release of the Alpha, players were able to redeem their keys on Steam. Because the game was greenlit, it is on Steam Early Accessfailed verification. The developers post a developer log on their channel, and only recently started scheduling them to every one to two weeks.