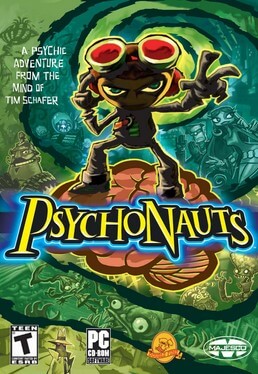 Psychonauts is a platforming game developed by Double Fine Productions that first released in 2005. The game was initially published by Majesco Entertainment for Microsoft Windows, Xbox and PlayStation 2; Budcat Creations helped with the PlayStation 2 port. In 2011, Double Fine acquired the rights for the title, allowing the company to republish the title with updates for modern gaming systems and ports for OS X and Linux.

Psychonauts follows the player-character Raz (voiced by Richard Horvitz), a young boy gifted with psychic abilities who runs away from the circus to try to sneak into a summer camp for those with similar powers to become a "Psychonaut", a spy with psychic abilities. He finds that there is a sinister plot occurring at the camp that only he can stop. The game is centered on exploring the strange and imaginative minds of various characters that Raz enters as a Psychonaut-in-training/"Psycadet" to help them overcome their fears or memories of their past, so as to gain their help and progress in the game. Raz gains use of several psychic abilities during the game that are used for both attacking foes and solving puzzles.

Psychonauts was based on an abandoned concept that Schafer had during the development of Full Throttle, which he expanded out into a full game through his then new company Double Fine. The game was initially backed by Microsoft's Ed Fries as a premiere title for the original Xbox console, but several internal and external issues led to difficulties for Double Fine in meeting various milestones and responding to testing feedback. Following Fries' departure in 2004, Microsoft dropped the publishing rights, making the game's future unclear. Double Fine was able to secure Majesco as a publisher a few months later allowing them to complete the game after four and a half years of development.

Despite being well received, Psychonauts did not sell well with only about 100,000 retail units sold at the time of release, leading to severe financial loss for Majesco and their departure from the video game market; the title was considered a commercial failure.

Psychonauts since has earned a number of industry awards and gained a cult following. Following the acquisition of the game, Double Fine's republishing capabilities and support for modern platforms has allowed them to offer the game through digital distribution, and the company has reported that their own sales of the game have far exceeded what was initially sold on its original release, with cumulative sales of nearly 1.7 million as of December 2015. A sequel, Psychonauts 2, was announced at The Game Awards in December 2015 and is planned for a 2020 release.

Psychonauts is a platform game that incorporates various adventure elements. The player controls the main character Raz in a third-person, three-dimensional view, helping Raz to undercover a mystery at the Psychonauts training camp. Raz begins with basic movement abilities such as running and jumping, but as the game progresses, Raz gains additional psychic powers such as telekinesis, levitation, invisibility, and pyrokinesis. These abilities allow the player to explore more of the camp as well as fight off enemies. These powers can either be awarded by completing certain story missions, gaining psi ranks during the game, or by purchasing them with hidden arrowheads scattered around the camp. Powers can be improved — such as more damaging pyrokinesis or longer periods of invisibility — through gaining additional psi ranks. The player can assign three of these powers to their controller or keyboard for quick use, but all earned powers are available at any time through a selection screen.

The game includes both the "real world" of the camp and its surroundings, as well as a number of "mental worlds" which exist in the consciousness of the game's various characters. The mental worlds have wildly differing art and level design aesthetics, but generally have a specific goal that Raz must complete to help resolve a psychological issue a character may have, allowing the game's plot to progress. Within the mental worlds are censors that react negatively to Raz's presence and will attack him. There are also various collectibles within the mental worlds, including "figments" of the character's imagination which help increase Raz's psi ranking, "emotional baggage" which can be sorted by finding tags and bringing them to the baggage, and "memory vaults" which can unlock a short series of slides providing extra information on that character's backstory. Most of these worlds culminate in a boss battle that fully resolves the character's emotional distress and advance the story. The player is able to revisit any of these worlds after completing them to locate any additional collectibles they may have missed. Raz is given some items early in the game, one that allows him to leave any mental world at any time, and another that can provide hints about what to do next or how to defeat certain enemies.

Raz can take damage from psychically empowered creatures around the camp at night, or by censors in the mental worlds; due to a curse placed on his family, Raz is also vulnerable to water. If Raz's health is drained, he is respawned at the most-recent checkpoint. However, this can only be done so many times while Raz is within a mental world, indicated by the number of remaining astral projections; if these are expended through respawning, Raz is ejected from the character's mind and must re-enter to make another attempt. Health and additional projections can be collected throughout the levels, or purchased at the camp store.