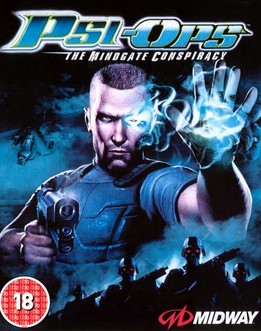 Psi-Ops: The Mindgate Conspiracy is an action adventure video game developed by Midway Games for the Xbox, PlayStation 2 and Microsoft Windows platforms. The game was released in North America on June 14, 2004; the European release followed on October 1, 2004.

A traditional shooter in many respects, Psi-Ops banks on its ragdoll physics (by way of Havok 2.0) and variety of psychic powers to differentiate itself. In the game, the player is Nick Scryer, a "PSI-Operative" whose mind has been wiped to allow him to infiltrate a terrorist organization. However, he is captured and must fight his way out with the help of Sara, a double agent. As he progresses, he regains his PSI powers.

On June 9, 2008, the full version was offered as a free download hosted by FilePlanet with in-game advertising, but also allowing to purchase the game in order to remove the advertising. A FilePlanet subscription is required to receive the game. On December 2018 majorgeeks.com now host the pc game as "freeware" because fileplanet is no more.

When the story begins, Nick Scryer has no memory of who he is, his mind having been wiped in order to infiltrate a terrorist organization known as The Movement. After being imprisoned, the player is released by Sara and given a drug to regain his memory and lost abilities. It begins with the game's most prominent power, telekinesis, and moves from there.

Nick also faces off against a plethora of former PSI-Operatives, all of whom have defected with the general that formerly led the PSI-Ops project. Each is specialized in a certain field of psychic ability (the first boss, for example, is an expert in mind control) and far more powerful in that field than Nick. Nick defeats them one by one; usually through creative combinations of his weaker but more varied psychic abilities.

As Nick moves his way through the organization, he learns of mysterious, psi-based objects that have been the focus of wars over the last century (a cutscene suggests these artifacts are in fact the causes of wars such as World War II). At the same time, he begins noticing strange behavior in Sara, who seems to rotate between friend and foe for no apparent reason. It is eventually discovered that Sara in fact has a twin, who is killed by Sara near the end of the game.

As the game comes to an end, the many artifacts are combined into a single device, which when combined with a special machine give the user nearly limitless psychic power. Nick regains his full memory while attempting to stop this. The general uses this device on himself, and is summarily defeated by Nick. Though his defeat is the same regardless of how the player goes about doing it, the point of the battle is to absorb some of the immense psychic power before the general, giving Nick a special weapon to use and a much better chance of defeating the general than if he had missed the opportunity to do so.

After the general is defeated, the device is broken back into its component artifacts, and two helicopter gunships promptly appear to recover them, not concerned with the lives of Nick or Sara. In the game's final cutscene, Nick crashes one of the helicopters with telekinesis. The screen fades to black and the words "TO BE CONTINUED" appear.

On 20 February 2007, William L. Crawford III filed a copyright infringement suit against Midway. The complaint stated that Crawford had written a screenplay titled "Psi-Ops" sharing a similar premise and other similarities with the game, including some of the characters and their psychic abilities, and that Midway wrongfully appropriated and exploited Crawford's work without his permission. Midway has stated that they do not comment on legal matters. In December 2008, the United States District Court for the Central District of California issued a ruling granting summary judgment on all counts in Midway's favor, having found no evidence of copyright infringement.