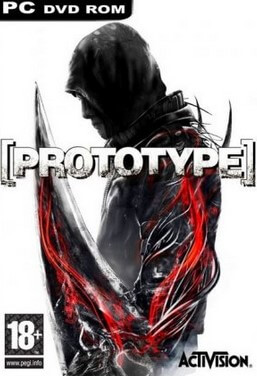 Prototype (stylized as PROTOTYPE) is an open world action-adventure video game developed by Radical Entertainment and published by Activision. The game was released in North America on June 9, 2009 (PlayStation 3 and Xbox 360), in southwestern parts of North America (Microsoft Windows) as well as Oceania on June 10, and in Europe on June 12. Versions for PlayStation 4 and Xbox One were released on July 14, 2015 alongside the sequel as Prototype Biohazard Bundle. Separate versions of the games became available in August 2015.

Set in Manhattan, the game follows a powerful amnesiac shapeshifter named Alex Mercer who must stop an outbreak of Redlight, a plague that mutates individuals into hideous violent monsters. During his quest, Alex tries to uncover his past while also coming into conflict with both the US military and a black operations force called Blackwatch. Parallel to the game's storyline is the ability to play the game as a sandbox-style video game giving the player freedom to roam Manhattan.

The game was a critical and commercial success, with critics praising the game for its originality and engaging gameplay. Many reviewers compared and contrasted it with Infamous, another open world action-adventure game released one month prior to Prototype. A sequel, Prototype 2, was released in April 2012.

Alex's primary superpower is his ability to shapeshift, changing his body into anyone. Going hand-in-hand with this power is his ability to "consume" others, absorbing them entirely. This process allows Alex to quickly regain health by absorbing the biomass of his enemies. This also allows him to take on the forms of the human enemies he absorbs, thereby allowing the player to move about the enemy as one of them. The disguise will only last as long as Alex remains inconspicuous. Alex has incredible physical strength, and will kill most humans in a single punch. He can perform various melee attacks without shapeshifting, as well as more gymnastic moves such as air combos, sliding along the ground using any humanoid enemy's body, and a high-speed rolling cannonball attack.

Alex can also transform parts of his body into a selection of martial implements acquired over the course of the game, either as purchased upgrades or being given them. Offensive powers include the large and powerful Blade arm, fast razor-sharp Claws (which can also erupt large spikes from the ground), the telescoping Whipfist, Musclemass that augments his strength, and the slow but powerful Hammerfists. Defensive options consist of a large shield on Alex's left arm for blocking ballistic attacks that needs to regenerate after excessive damage, and full body armor that exchanges agility and speed for toughness in hand-to-hand combat; both will allow Alex to plow through most obstacles when active. Vision modes include thermal vision, which allows Alex to see enemies through smoke and other obstacles at the expense of a decreased vision range, and Infected vision, which highlights those infected with the BLACKLIGHT virus as well as military units. Both vision modes muffle all of Alex's other senses, such as hearing, in order to concentrate on his sight. One defensive and offensive power may be active at a time, and using either will negate Alex's current disguise. In addition to his own abilities, Alex can take the weapons from defeated or absorbed enemies. These include automatic rifles, machine guns, grenade launchers and missile launchers. He can also seize control of military vehicles, such as tanks and helicopters.

Alex's most powerful attacks are the Devastators, which require Alex to be in Critical Mass- either a state of near-death or the exact opposite, having excess stored biomass and increased health. These include the Tendril Barrage, which fires impaling tendrils from his body in all directions, the Groundspike Graveyard, which erupts massive spikes from the ground all around Alex, and the Critical Pain, which fires a single beam of hardened biomass from his hands to severely damage a single target.