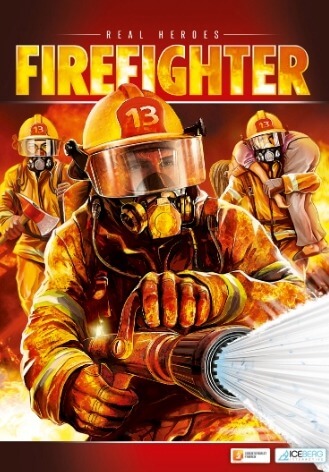 Firefighter is a first-person shooter. The player, controlling a firefighter who the fellow firefighters refer to as Probie, uses a hose and fire extinguisher to fight flames, a halligan bar to pry open locked doors and vent coverings, and a fire axe to destroy obstacles. The player will work with at least one other firefighter with an extinguisher in some areas though in others, he is alone. The player has objectives to complete such as rescuing civilians or other firefighters, extinguishing all fires in an area, disabling something that causes the fire to spread, and more. The player will fail the mission and be forced to restart the mission from beginning or checkpoint if he stands too close to the fires for too long, getting electrocuted by being to close or using the hose on exposed electricity, and failing a mission objective. The player fights fires in an industrial park, a shopping mall, a neighborhood, a tower, a museum, a robotics research facility, a bridge, and an amusement park.

Enter the soot-stained boots of an everyday hero as a newly graduated Fire Academy cadet getting their start in a big city firehouse. Experience raging infernos and explosive environments in this unique first person action game. Use the firefighter's tools of the trade like the axe, hose and saw to rescue survivors and get the fires under control.

Real Heroes: Firefighter was nominated by IGN for Wii Shooter of the Year