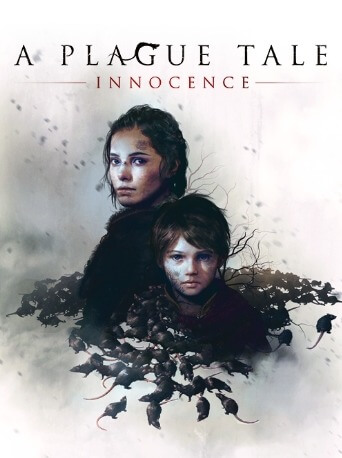 A Plague Tale: Innocence is an action-adventure horror stealth game developed by Asobo Studio and published by Focus Home Interactive. It was released for Microsoft Windows, PlayStation 4 and Xbox One in May 2019, and received generally positive reviews from critics.

In the game, the player assumes control of Amicia de Rune from a third-person perspective. For the majority of the game, players need to utilize stealth to avoid hostile encounters, as enemies will kill Amicia instantly if they catch her. Amicia is equipped with a sling which can throw rocks to break chains, create distractions, or stun guards long enough for the rats to ambush them; she can even kill them outright with a headshot. The game is a series of survival puzzles, mostly consisting of methods to scare away or distract the hordes of hungry rats in order to gain access to new areas, or direct them towards enemies. The main method of warding rats off is fire, as rats will seldom enter within a radius of burning torches and braziers. Amicia can also craft special ammunition and supplies, which include fire-starting sulfur stones that ignite braziers, stink bombs that attract rats, or fire suppressants to extinguish torches carried by enemies. Amicia's younger brother Hugo can be directed towards specific tasks when Amicia is busy. However, this is risky, as Hugo will start to panic if left alone and can attract unwanted attention. Later in the game, the player can assume control of Hugo, who cannot craft items but is able to control rats and sneak through small spaces. All these abilities are combined when the siblings unite in the late game.

In 1348, Amicia de Rune is a young girl of noble descent who lives with her family in rural Aquitaine, which has been invaded by the English army. Her younger brother Hugo has been ill since birth, and their mother Beatrice, an alchemist, has locked him away in the family estate for years while trying to devise a cure. While hunting with her father Robert in the forest, Amicia encounters signs of a blight, and her dog Lion is gruesomely consumed by an unseen entity. They hurry back to the de Rune estate, but troops from the Inquisition led by Lord Nicholas arrive and raid the estate in search of Hugo, executing Robert and several servants. Beatrice helps them escape and instructs Amicia to take Hugo to his doctor Laurentius before she is apparently killed.

Amicia and Hugo flee to a nearby village, where they learn that hordes of ravenous rats have been spreading plague and devouring anything they come across. Evading hostile villagers who hold Hugo responsible for the plague, and more Inquisition soldiers, Amicia and Hugo reach Laurentius's farm, only to find him bedridden by the plague. Laurentius implores Amicia to finish her mother's work. When Laurentius's house is overrun by rats, Amicia and Hugo flee with his apprentice Lucas to seek the hidden Château d'Ombrage.

As they evade the rats and invading English soldiers, Lucas explains that Hugo's blood carries a supernatural evil called the Prima Macula, which has lain dormant within certain noble bloodlines since the Justinian Plague. Beatrice and Laurentius had been trying to find a cure, while the Grand Inquisitor, Vitalis Benevent, covets its power. They are assisted by the sibling thieves Melie and Arthur, but Arthur is captured before the remainder make it to the Château d’Ombrage.

Lucas reveals that he needs a forbidden book called the Sanguinis Itinera to complete the elixir that may cure Hugo. Amicia infiltrates the nearby university to retrieve the Sanguinis Itinera while Melie heads off to rescue Arthur. Amicia recovers the book and rescues a young blacksmith named Rodric, who helps her escape. They reunite at the castle with Melie and Arthur, who reveals that he witnessed Beatrice in the Inquisition's custody. Amicia insists they not tell Hugo, but Hugo overhears the conversation, and his condition abruptly deteriorates. Amicia and Lucas return to the De Rune estate, looking for answers in Beatrice's research. They complete the elixir and administer it to Hugo, relieving his symptoms. However, Hugo then runs away and turns himself over to the Inquisition to find Beatrice, leaving Amicia riddled with guilt.

Vitalis injects himself with Hugo's blood so that he too can possess the power of the Macula, but Lucas's elixir delays its development. Hugo manages to escape custody and finds Beatrice, who reveals that the Macula gives him the power to control the rats. Unfortunately, Beatrice and Hugo are recaptured, and Vitalis threatens Beatrice's life in an attempt to force Hugo's powers to fully awaken.

A month later, in January 1349, the Château d’Ombrage is suddenly attacked by a swarm of rats led by Lord Nicholas and Hugo, who is embittered against Amicia. Nicholas kills Arthur and orders Hugo to kill Amicia, but she reconciles with Hugo and they work together to overwhelm Nicholas with the rats before he falls through the floor, leaving his fate unknown. The children decide that with the power of the rats they can take the fight to the Inquisition and rescue Beatrice.

The children head for the Bastion, the cathedral where the Inquisition has set up its headquarters. Rodric sacrifices himself to allow the others to reach the cathedral where Vitalis is waiting, having bred thousands of rats that only he can control. Vitalis and Hugo use their Macula powers to send hordes of rats at each other until Amicia is able to kill Vitalis with her sling. Three days later, both the rats and the plague have disappeared, and life begins to return to normal, although many remain wary of Hugo and his power. Melie parts ways with the group, and Amicia, Hugo, Lucas, and an ailing Beatrice head towards the harbor to find a new home.

According to review aggregator Metacritic, the game received "generally favorable reviews" from critics. It was the ninth best-selling retail game in the UK in its week of release.