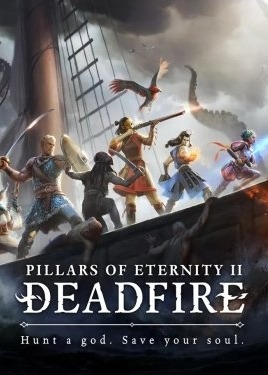 Pillars of Eternity II: Deadfire is a role-playing video game developed by Obsidian Entertainment and published by Versus Evil. It is the sequel to the 2015's Pillars of Eternity, and was released for Microsoft Windows, Linux, and macOS in May 2018, and will be released for the Nintendo Switch, PlayStation 4, and Xbox One in 2019. The game was announced with the launch of a crowdfunding campaign on Fig in January 2017, where the game reached its funding goal within a day.

Pillars of Eternity II: Deadfire is a role-playing video game that is played from an isometric perspective. Both returning and new companions are available, depending upon the choices made by the player, which play an optional story role within the game. Deadfire focuses on seafaring and island exploration via a ship. Crews can also be hired to look over them, and assist in ship combat. Class based gameplay returns, with each class having at least four optional sub-classes with unique skills. A new feature in Deadfire is the ability to multi-class.

Deadfire is a direct sequel to Pillars of Eternity, taking place in the world of Eora. As with the first game, the player assumes the role of a "Watcher", a character with the ability to look into other people's souls and read their memories, as well as the ones of their past lives.

The story begins five years after the events of the first game. Eothas, the god of light and rebirth who was believed dead, awakens under the player's stronghold Caed Nua from the first game. Eothas' awakening is extremely violent, and he destroys Caed Nua, while he drains the souls of the people in the surrounding area. The Watchers themselves similarly has a piece of their soul torn out during the attack, but manage to barely cling on to life. In this near-dead state, they are contacted by Berath, the god of death, who offers to restore their soul if they in exchange agree to become Berath's herald and take on the task of pursuing Eothas and find out what he is planning. The hunt for Eothas takes the Watcher via ship to the Deadfire Archipelago, where they must try to seek out answers—answers which could throw mortals and the gods themselves into chaos. The player's actions and decisions in the first game influence certain storyline elements of Deadfire.

Throughout the story, the Watcher meets four different factions all vying for control over the Deadfire area: the imperialistic Royal Deadfire Company, acting on behalf of the expansionist Rauatai empire; the more profit-oriented and mercantile Vailian Trading Company, acting on behalf of the Vailian Republics; the traditionalist Huana, a tribal alliance of natives seeking to uphold their people's independence; and the Príncipi sen Patrena, a federation of pirates seeking to establish a republic of their own. The Watcher can help or hinder these factions along the way. Through their pursuit of Eothas, the Watcher eventually discovers the god's true intentions: he aims to break the Wheel, the cycle of reincarnation that governs the souls of Eora and by extension feeds the gods with the energy they need to sustain themselves, hoping that in doing so he can break the other gods' control over all mortal beings, allowing them to be free to pursue their own destinies. To that end, he seeks the mythical lost city of Ukaizo, where the mechanism controlling the Wheel is housed. Though the other gods intervene several times in an attempt to stop Eothas, he is undeterred and continues towards his goal.

By either swearing fealty to one of the factions and gaining their help or acting independently, the Watcher and their ship braves the stormy sea of Ondra's Mortar, which protects the city of Ukaizo, just as Eothas makes his final approach towards to the Wheel, and confronts him there. Eothas, though sympathetic to the Watcher, refuses to back down from his endeavor, explaining to the Watcher that destroying the Wheel would most likely kill him and the rest of the gods for good, but that his death will also give him the power to enact a great change upon all of Eora. Before destroying the Wheel, he returns the piece of the Watcher's soul he took from them, thereby freeing them from their debt to Berath, and asks for their advice on what that change should be. An epilogue then follows, detailing the effects the Watcher's choices had on their companions, the different factions, the Deadfire, and the world at large. In the end, the Watcher resolves to head home to the Dyrwood, uncertain of what the future now holds for both gods and mortals.

Pillars of Eternity II: Deadfire was met with positive reviews. It is currently listed on Metacritic with a score of 88/100, indicating "Generally favorable reviews" according to the site.