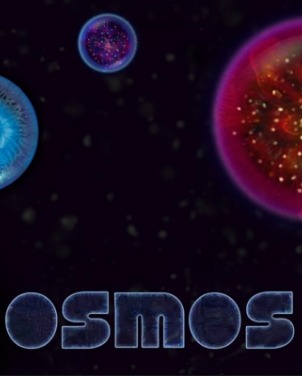 The aim of the game is to propel oneself, a single-celled organism ("Mote"), into other smaller motes to absorb them. Colliding with a mote larger than the player will cause the player to be absorbed, resulting in a game over. Motes smaller than the player are blue, while motes bigger than the player are red. Changing course is done by expelling mass. Due to conservation of momentum, this results in the player's mote moving away from the expelled mass, but also in one's own mote shrinking.

There are three different "zones" of levels in Osmos: In the "sentient" levels, the goal is to prevail over active motes of various types that hunt and absorb other motes, including the player. Hunting them typically involves absorbing as many inactive motes as possible before chasing down the active ones with the extra mass one has gained.

In the "ambient" levels, the player's mote typically floats in a large area surrounded by inactive motes, and must become the largest or simply very large. Variations on this theme involve, for instance, starting the game as a very small mote surrounded by lots of larger, fast moving motes, or the presence of "antimatter" motes which shrink normal motes during collision no matter which one was originally bigger, or starting the game stuck in a huge, densely packed area with a large number of other motes without much space to move about and having to nudge other motes out of the way by ejecting mass at them.

In the "force" levels, special motes ("Attractors") influence other motes with a force similar to gravitation. The player has to take into account orbital physics when planning movement in order to save mass when changing course. In these levels, the game optionally assists the player with a course trajectory tool that plots the mote's course, up to a short time in the future. Force levels are complicated in various ways, including levels with mutually repelling attractors, attractors bouncing randomly around an area full of motes, several "strata" of bodies in retrograde rotation about an attractor, and attractors orbiting other attractors.

On June 25, 2012 Hemisphere Games announced the release of a multiplayer version of Osmos for iOS on the company blog and from the game's Facebook Page for July 19, 2012.

Osmos received generally favorable reviews with a score of 80/100 on Metacritic based on 22 critic reviews. At IndieCade in 2009, Osmos was named "Best in Show" and won the Fun/Compelling award. Apple Inc. selected Osmos as the iPad game of the year for 2010. It also won many other awards that year. IGN awarded Osmos its best video game soundtrack of 2010.