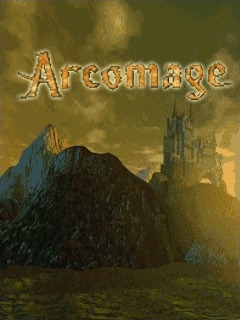 Arcomage is a computerized card game produced by The 3DO Company. It originated as a minigame in Might and Magic VII: For Blood and Honor and Might and Magic VIII: Day of the Destroyer, in which it was used to gamble for in-game money or to complete a quest to win games in every tavern. 3DO later released it as a stand-alone game in 2000. In the stand-alone version a single player can play against a computer opponent or two players can play via a LAN or TCP/IP connection. Arcomage uses the fantasy themes of the game in which it is set.

Arcomage was developed by Stickman Games. The game was sold to 3DO.

Arcomage takes the form of a tabletop game, in which there are two players, each with a deck of cards, a "tower" and a "wall", as well as several other variables that determine whether they win or lose, and what cards they can play. As Might and Magic is a single-player game, one would always play against an AI opponent - making the game relatively easy to win.

Various open-source Arcomage projects have sought to keep Arcomage alive on the internet in player-versus-player battle. Some, like MArcomage, have expanded Arcomage and added new cards, effects, and factions.

Similarly, countless Arcomage-style games are available for iOS and Android, among other formats.

One of the most successful versions of Arcomage on Android, called "Archmage", has expanded the game with many more cards including Fire, Nature, and Soul cards as well as Tower enhancements. Players from around the world compete, are ranked, and contribute to expanding the game on its official website.

Furthermore, there are two flash adaptations of Arcomage under the name of CastleWars and CastleWars 2.

Czech adaptation Mravenci (Ants) from 2000 and it's still well known among people in Czech republic and Android port is available on the google playstore for free.