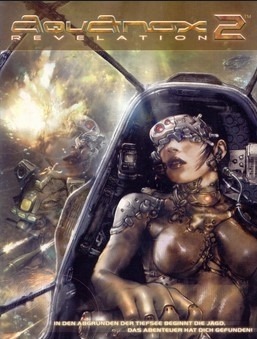 The plot of the game centers on William Drake, the last remnant of the old aristocratic, industrialist family. After the bankruptcy of the family business and the death of the protagonist's grandmother, young William Drake sets "sail" for open seas on the last freighter of Drake Enterprises. The cargo ship soon gets taken over by a group of mercenaries while Drake rushes out to answer a distress call. While sparing his life, the group of seven invaders seize control of the boat, thus binding Williams' fate to their own. Drake sees no other option but to ally himself with his new crew, hoping for the best.

The game features a total of four unique, playable and upgradeable gunships. The player will most likely switch boats depending on a given mission's parameters. While certain missions will require speed and stealth, others will virtually require a heavy arsenal and thick plating. The game features a large variety of projectile armament as well as a set of torpedoes and a collection of directed energy weaponry, including lasers and EMP launchers. The torpedo combat is similar to the missile engagements of most flight simulators and space shooters, where the pilot is expected to release flares and perform classic evasion manoeuvres.

Traveling is generally a simple matter of following the navigation points spread out through the game. The ship's controls can be switched from the FPS mode to Simulation Mode via a predefined shortcut, where the latter steering scheme switches the horizontal scrolling of the mouse from turning the cockpit horizontally to rotating the hull around its axis. Reaching the surface is not possible due to the depth-range limitation, which binds the player to the underwater world yet gives certain disadvantages during combat.

In response to criticisms of poor interaction with other characters in AquaNox, a new dialogue system was added in the sequel. Between missions, the player is able to initiate conversations while on board the freighter as well as in the oceanic cities. The initiation of the conversations is mandatory. However, due to the absence of interaction during the dialogues, the outcome of the game is not open-ended. The dialogue and characters are the focus of many reviewers' ire, who criticize it as poorly-written and ultimately pointless.Gerstmann, Jeff (2003-09-29). "Aquanox 2 Revelation Review". Gamespot.com.Deim, I. "Aquanox 2 Revelation Review". Gamershell.com.