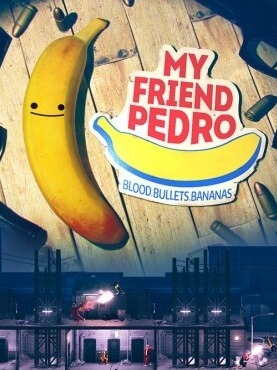 My Friend Pedro involves the player traversing a variety of themed levels while killing enemies in a stylish fashion. The game iterates on the gameplay featured in the flash game, including similar controls, mechanics and weaponry. Along with the ability to slow time, the player can now kick objects or enemies, split their aim between targets and dodge bullets by spinning. The game also features parkour elements such as flips, wall jumps and rolls, which can be used to increase the number of points awarded. Another new feature allows players to kill enemies by ricocheting bullets off frying pans or signs, which also adds to the point total.

Points are awarded for each successful hit from the player, while each kill increases the current point multiplier. Players are given a rank at the end of each level based on their total number of points, which is shared on a global leaderboard.

My Friend Pedro started development in February 2015 "on and off" until indirectly announcing that development would be in full swing on December 4, 2015 in a devlog.  It had been announced that it was in the pre-alpha stage of development on November 21, 2015 aimed to release on PC and "eventually" Macintosh computers.