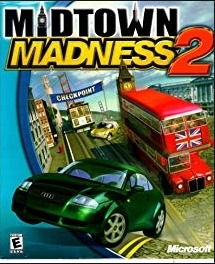 Midtown Madness 2 is a free roam racing/arcade sequel to Midtown Madness, part of the Midtown Madness series, developed by Angel Studios and published by Microsoft, which features a range of vehicles that can be driven around London and San Francisco.

The game features Blitz, Checkpoint, Circuit, and Cruise modes, which are all derived from the original Midtown Madness game. Winning Blitz, Checkpoint and Circuit races allows the player to access unlockables, and the Cruise mode lets the player roam freely around the two open world recreations of London and San Francisco. A Crash Course can be completed in each of the cities. The Cab Driving School in London follows an extremist view of a London cab driver, where a player must complete objectives in a London cab. The Stunt Driver course in San Francisco allows the player to gain experience in stunt driving for a Hollywood movie, using the Ford Mustang Fastback.

Players can change the visual appearance of the game before starting a race, such as the weather and time of day. Additionally, the frequency of how many cops spawn around the city can be modified, along with the amount of traffic and pedestrians. In Cruise Mode, this can change where the player starts off. Every race or cruise begins with a commentator introducing the course. These commentators would also be heard at the end of a race saying something that depends on the player's position upon finishing. The commentators would be different for each race, and they are different for each of the two cities. The commentators can be turned off. One of the game's most entertaining aspects is its humor; for example, the new age retro hippie in San Francisco singing out-off-tune variation of John Lennon song Give Peace a Chance. In most races and Cruise mode, people in cars and pedestrians can yell comments at players in different languages.