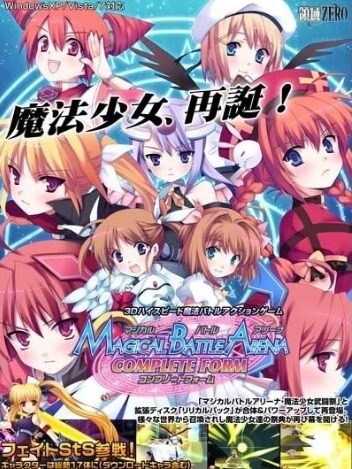 Magical Battle Arena is primarily an arena third-person shooter where the players choose a character and try and defeat everyone else. The game offers the Story, VS, and Survival modes, the Network Play up to four players, and the Mission Mode, where specific requirements are needed in order to succeed in the mission, given the grade of how well one did.

Each character has basic attacks (both ranged and melee), a defense power, and a sprint. In addition to each of these basic skills each character has their own special attacks, the effects of which differ greatly between characters. The battlefield where this takes place is in the airspace above a given map. Some places are naught but open area, whereas others may provide cover and obstructions, usually in the form of tall buildings or geological formations. The characters all share a common control scheme, including frequent use of 'charging' attacks.

The plot of the Story mode, like many fighting games, is mainly a framing device that serves mostly to explain how such a diverse number of characters would all be brought together. The basic, plot follows, though the specifics differ depending on which character has been chosen to play through, though all tell essentially the same story, if from different points of view.

Every millennia, in order to maintain the cosmic balance of magic amongst the multiverse a tournament is held in order to find the greatest, most powerful mage. The participants in this tournament are all kidnapped from their world of origin and transported to a separate dimension. All are told they must fight and win in order to return home. Along the way one competitor the character comes across is their friend (and/or companion). They first must fight, and when the character succeeds in defeating them, they join forces. Once the character and their companion have faced and defeated all the other competitors, they face the apparent host of this tournament, and are told the truth of the fighting. In order to maintain the cosmic balance of magic among the multiverse, the strongest and most powerful mage must be made a teosu - sacrificed to run the "magical tuning system Kyrios". The last duty of a teosu is to select the next one, and the tournament was the most effective way of finding who would become the next. After these characters fight, it is decided that they will all work together to find an alternate solution to maintain the balance, though the plan is never clarified.

From Magic Knight Rayearth: Hikaru, Umi, and Fuu (one character)

From Slayers: Lina Inverse; Naga the Serpent; Lord of Nightmares

New characters released in the Lyrical Pack (update to 1.50 from 1.05): Vita, Yagami Hayate, Takamachi Nanoha StS, Lord of Nightmares, and Kita Kita Oyaji are not available in Story mode.( Update to 1.70 from 1.50): adds Fate T. Harlaown StS from Magical Girl Lyrical Nanoha StrikerS, and Hikaru, Umi, and Fuu from Magic Knight Rayearth (they play as one character and the player can swap between them using special moves) but they are also not playable in Story mode.