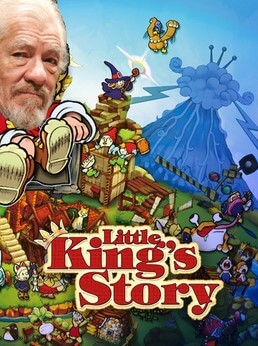 Little King's Storya is a real-time strategy life simulation role-playing video game co-developed by Cing and Town Factory for the Wii. The game was published by Rising Star Games in Australia on April 22, 2009 and Europe on April 24, 2009, by Xseed Games in North America on July 21, 2009, and by Marvelous Entertainment in Japan on September 3, 2009.

The player character is a timid boy who has found a mysterious crown which gives him the power to charm people and make them follow orders. As king of the village his goal is to expand the village and make his subjects happy. The design of the game combines various simulation elements as well as real time and adventure elements. Yasuhiro Wada told CVG that the game would be a "single-player life-sim set in Europe." An enhanced re-imagining of the game was released on the PlayStation Vita under the title of New Little King's Story. The Microsoft Windows version of the game has been released on August 5, 2016. The game is published by North American version of the game publisher Xseed Games.

In Little King's Story, players control the new king, Corobo. With his undeniable charm and control, he issues various orders to citizens. Though starting in what is essentially a cluttered field, players begin to upgrade the kingdom of Alpoko with activities such as treasure hunting and fighting. Within a few hours, players are able to purchase and institute various buildings, training facilities, and other castle commodities, while the population steadily grows. All important stats such as population and finances are tracked constantly through an easily accessible menu system.

Corobo's followers are initially very limited and weak in capability; however, this is quickly corrected when training facilities are built. At that point, the player can send his citizens into the buildings and change them into a different type of worker. The game offers different jobs for civilians, including but not limited to soldier, carpenter, peasant, farmer, and hunter. Each job allows citizens different capabilities and weaknesses. For example, a farmer is exceptional at field work and digging, but is a poor fighter, while soldiers are strong but lack the ability to traverse environmental obstacles. Corobo is also able to converse with his followers whenever he desires, though it usually only produces small talk.

Outside of the main story, side quests are widely available via a suggestion box in the town square. Courtesy of varied civilian complaints, Corobo can accept missions that range from fetch quests to hunting and fighting that allow him to keep his public satisfied and increase finances. On some days, players are actually unable to do much due to events such as celebrations. After conquering a rival land, for example, the next day a massive parade is held in Alpoko. During this day, commanding people is a futile effort as they are too busy enjoying themselves. Saving progress can only be done in the kingdom.

Along with building and fortifying the kingdom, adventuring and questing constitutes the bulk of Little King's Story. Alpoko is only a small portion of the world, which the players must explore in order to advance the plot, collect valuable treasures and bounty, and conquer the seven rival kingdoms. It is here where having variously classed citizens comes in useful, as the player will encounter various environmental obstacles, including things such as gaps in the land, caved in areas, and of course a wide slew of dangerous enemies, including boss battles.

Corobo attacks with his sceptre, but his attacks are extremely weak. Instead, he must have others do all fighting for him. All civilians and Corobo possess a set amount of life; should a civilian lose all of his he will die, while if the king dies it is game over. Scattered throughout the land are little hot springs that allow the player to replenish his life; however, in order to save and collect bounty, the player must travel back to Alpoko first.