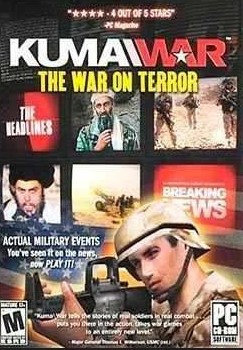 Kuma\War is notable for its current free-to-play ad-supported business model, its ardent Iraqi fan base and continuous updates, delivering new episodes each month. Every episode from the collection of Kuma\War missions can be downloaded for free and played as a single-player first-person shooter. Popular past missions can also be played as a free online multiplayer experience.

In July 2006, Kuma\War 2 was released, featuring improved graphics (based on the Source engine) and an expanded online multiplayer environment. The first mission re-creates the killing of Abu Musab al-Zarqawi.

First released in 2004, Kuma\War now features over 120 missions, known as "episodes". While many episodes are drawn from the Iraq, Kuma has also re-created events from the Afghanistan, Iran, South Korea (a 1996 raid by North Korean commandos), Vietnam (John Kerry's Silver Star mission), Sierra Leone (Operation Barras) and Mexico (a battle between Mexican soldiers and drug cartels).

The first mission of the game (named "Uday and Qusay's Last Stand") is the battle in which the two sons of Saddam Hussein, Uday and Qusay, are killed. The attack is described as "a turning point in Operation Iraqi Freedom" and "a milestone in the War on Terror". Other significant episodes include "John Kerry’s Silver Star", "Fallujah: Operation al Fajr", and "Osama 2001: Tora Bora." The main distinguishing feature in Kuma\War is its extensive background information for each mission, which includes satellite photos, original articles and a multimedia library.

Osama bin Laden and the end of Kuma\War

The original Kuma\War is a military third person shooter utilizing the N-Fusion game engine. A first person perspective was also available for players to choose. A variety of weapons are available and depending on the mission the player either played solo or participated in squad based play. The game had 74 episodes produced for it before the developer moved on to its sequel Kuma\War 2.