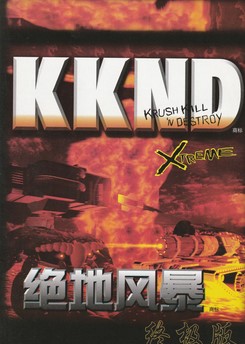 KKnD, or Krush, Kill 'n' Destroy is the first of three real-time strategy games in the KKnD series, and was released on March 25, 1997. The game takes place in a post-apocalyptic setting, where two factions are fighting for control over the few natural resources left. Each faction has its own campaign consisting of 15 missions each, and there is also a multiplayer mode which allows up to 6 people to play via LAN or modem/serial connection.

KKnD: Xtreme is an improved and extended version of KKND, released on October 31, 1997.

In the year 2079 conflicts arose between the major nations of Earth. A nuclear war resulted of this and the surface of the planet was destroyed. Some humans managed to burrow under the Earth's crust before the nukes obliterated the upper world, taking with them what they could salvage. They turned their attention to constructing machines to resurface. Those who survived the blasts yet lived above ground mutated, and dominated the Earth until the survivors broke through the Earth's surface and an armed conflict between the two groups erupted. The single player campaign chronicles a war in 2140 which is eventually won by the faction chosen by the player.

According to Tim Ansell of The Creative Assembly, sales of KKnD reached 600,000 copies. Its success was an inspiration for the company's own Shogun: Total War, as Ansell considered KKnD "an absolute pile of crap" that showed the ease of success for real-time strategy games at the time.

A fan project aims to make the originals compatible with modern systems while improving online functionality, modding capabilities, support for a broader range of resolutions and operating systems by using the OpenRA engine. The game is openly developed at GitHub. It requires the original assets, which can be bought at online stores like GOG.