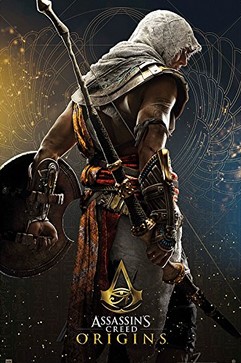 Assassin's Creed Origins is an action-adventure video game developed by Ubisoft Montreal and published by Ubisoft. It is the tenth major installment in the Assassin's Creed series and the successor to 2015's Assassin's Creed Syndicate. It was released worldwide for Microsoft Windows, PlayStation 4, and Xbox One on October 27, 2017. The game is set in Ancient Egypt near the end of the Ptolemaic period (49–47 BCE) and recounts the secret fictional history of real-world events. The story follows a Medjay named Bayek, and explores the origins of the centuries-long conflict between the Brotherhood of Assassins, who fight for peace by promoting liberty, and The Order of the Ancients—forerunners to the Templar Order—who desire peace through the forced imposition of order.

Origins received positive reviews from critics, who praised the story, characters, voice acting, reworked gameplay-systems, immersive world of Egypt, historical accuracy and the visuals, while criticizing some of the pacing and technical issues. The game was followed by Assassin's Creed Odyssey, which takes place in Classical Greece and was released on October 5, 2018.

The "eagle vision" mode, which was used by the franchise to give the player the ability to scout an area by highlighting enemies and objects, has been replaced by a Bonelli's eagle named Senu as a companion. The player is able to take control of Senu and scout an area in advance, highlighting enemies which will then be visible when they return to controlling Bayek, the game's main character. The player can also tame various predators which will serve as a companion for the player and assist them against enemies. Naval combat, underwater exploration and tomb raiding return to the series.

The game also features revised combat mechanics. Previous titles in the Assassin's Creed series used a "paired animation system" whereby the player character would engage with an enemy and combat would be dictated by a series of predetermined animations based on player inputs and scripted AI movements. Origins moves to a "hit-box system". When the player wields a weapon, they will strike at whatever is in range, allowing them to hit enemies directly, injure individual body parts, and creating the possibility of missing an enemy entirely. Complementing this is the way weapons fall into different categories and are rated on their damage dealt, speed and range.

Enemies will be drawn from several basic archetypes that use a variety of tactics in combat which, combined with the hit-box system, will require the player to learn the attributes of individual weapons and tailor their playing style to succeed in combat. As enemy combat is also dictated by the hit-box system, the player has been equipped with a shield and needs to balance their offensive and defensive capabilities. Locations within the game world are designed to enable the player to choose their playing style by offering stealth and open combat as equally-viable choices for completing objectives.

Origins introduces an arena-based combat system where the player fights waves of increasingly difficult combinations of enemies culminating in a boss fight. While the introduction to the arena is incorporated into the main story, the arena mode stands alone from the wider narrative. The game world features several arenas, with a variety of enemy combinations and unique bosses not found in the game world. The player is able to unlock additional weapons and equipment by completing arena fights.

n 49 BCE, Bayek, a Medjay charged with protecting the Siwa Oasis, is abducted along with his son Khemu by a group of masked men and taken to an underground vault in the Temple of Amun. The masked men give Bayek a dormant Apple of Eden and demand that he use it to open a secret Vault. Khemu helps Bayek escape, but while struggling with one of the masked men, Bayek inadvertently kills Khemu. One year later in 48 BCE, Bayek has exiled himself to track down the five masked men to take his revenge. He finds the first one, Rudjek "The Heron", and kills him. Bayek then returns to Siwa to kill the local priest Medunamun, "The Ibis", who has been torturing Siwans for information to open the same vault. Bayek then heads for Alexandria, where Aya has been tracking another of the masked men. Aya reveals that she has already killed Actaeon "The Vulture" and Ktesos "The Ram", leaving only one target left, "The Snake". Bayek identifies the Royal Scribe Eudoros as The Snake, but Bayek is disturbed by Eudoros' last words, which imply there are more masked men. Aya directs Bayek to her friend Apollodorus the Sicilian for more information. Apollodorus introduces him to Cleopatra, who confirms that the masked men form the Order of Ancients. The Order ousted her from the throne and seek to control all of Egypt by using Ptolemy as their puppet.

Cleopatra gives Bayek four new targets: "The Scarab", "The Hyena", "The Lizard" and "The Crocodile". He tracks them down and kills them while Aya convinces Pompey the Great to ally with Cleopatra. Bayek receives a letter from Aya explaining that there are more members of the Order at large, including members of Ptolemy's royal guard who are the likely culprits responsible for Khemu's death. Bayek begins to question his mission, believing Cleopatra is using him to kill her rivals. Pompey is killed by Lucius Septimius, "The Jackal", forcing Bayek and Aya to sneak Cleopatra into the palace to meet Julius Caesar. Cleopatra impresses Caesar and secures his support. Bayek kills Pothinus, "The Scorpion", but is stopped from killing Septimius by Caesar. Aya watches Ptolemy get eaten by crocodiles when he tries to flee across the Nile.