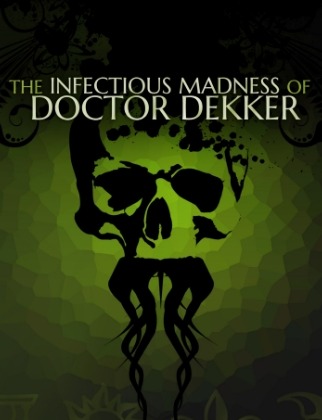 The Infectious Madness of Doctor Dekker is a FMV murder mystery adventure video game developed by D'avekki Studios and written by Tim Cowles and Lynda Cowles. You play as a psychiatrist, trying to solve a murder whilst treating the patients of the recently deceased Doctor Dekker. The game was initially released on Steam for Microsoft Windows and macOS before being published on consoles by British game publishing studio, Wales Interactive.

The player sees full-motion videos of characters who were patients of Doctor Dekker. The goal is to find out the details surrounding the death of Doctor Dekker. You play as a replacement psychiatrist and must ask the patients questions. You are free to switch between characters to find out more about them. In sessions with each patient, you interact by typing questions or comments into a text box. The game interprets your input and responds by spitting out a full-motion video reply from the subject. You have a list of responses in the log that will sometimes have asterisks beside them. One asterisk means there's still a question to ask, but two means you should follow up with this character. Questions can take plenty of forms, but you are generally free to type what you please. Hints are available, but have a cooldown before you can use them again.

The full identity of the playable character is not known except for the fact they are a replacement psychiatrist. They have been brought in to find out why the previous Doctor Dekker was murdered and they're tasked with interviewing Doctor Dekker many previous patients. One patient is a woman who blacks out and finds herself at the beach when she wakes up and another patient seems to relive the same day over and over again. One patient also believes that he gains an extra hour at the end of the day, during that hour time freezes and he is free to do whatever he likes without anyone knowing. The player's questions influence the events of the game and can lead to a variety of different responses ultimately resulting in different endings.

The Infectious Madness of Doctor Dekker was well received by both the public and critics. God is a Geek describes it as "a disturbing psychological horror that dips its toes into a whole manner of subjects", The Sixth Axis called it "an extremely polished text adventure that you absolutely must experience". The game was nominated for two awards, including a TIGA Games Industry Award (Diversity) and TIGA Games Industry Award (Heritage). The game was also listed in the Game Spew Best FMV game roundup.

On Metacritic it has a 78 score. On YouTube the game received over 2 million views with a Let's Play style series from content creator Jesse Cox.

Apart from the majority of positive reactions there were also a few critical voices. DarkStation left them feeling "tired and listless". Nintendo Life noted the game's continuity errors.

(0) Comments on "The Infectious Madness of Doctor Dekker Full Version"