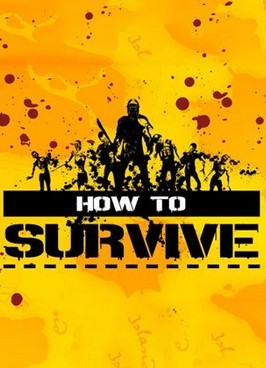 How to Survive is a survival horror action role-playing video game developed by French studio Eko Software and published by 505 Games. It was released on October 23, 2013 for Xbox 360, Xbox One, Microsoft Windows, PlayStation 3, and PlayStation 4 and it was released in June 2014 for the Nintendo eShop.

How to Survive is played from a top-down perspective. There are two game modes, story and challenge, and both can be played with up to two players. Challenge mode puts the player(s) on one side of the island, and they must get to the other side, where their getaway vehicle awaits. The player's mission is to gather materials, craft weapons, and make it off the island without dying. Neither challenge or story are timed, and therefore, the player can take as long as they want.

Players play as one of three survivors - the all rounded Kenji, the fast, arczar Abbie or the brawling Jack - shipwrecked on one of four zombie-infested islands that form an archipelago. After finding food for another wounded survivor, Andrew (who has already suffered a zombie bite), the survivor meets a one-legged old man named Ramon who owns a boat that can be used to travel between the islands. Together, they hatch a plan to escape the archipelago using a beached seaplane, with Andrew as the pilot. Ramon sends the survivor to fetch materials to repair the plane.

The survivor soon meets Kovac, a mysterious man in full armor who has made the islands his personal hunting ground. A self-proclaimed master survivor, Kovac is using his extensive field experience to write a zombie survival guide ('Kovac's Rules'), and gladly assumes a mentor role, helping the survivor with valuable advice and tools throughout the course of the game.

On the search, the survivor meets a woman named Carol whose young daughter, Emily, got separated from her. The survivor locates Emily, stranded on a cliffside, but is unable to save her from falling into the sea and getting swept away; Carol is devastated by the news. The plane is repaired, but Ramon realizes Andrew is (obviously) in no condition to pilot it and sends the survivor in search of someone who can.

The survivor meets a senile old woman, Martha, who is missing her companion Enzo (who turns out to be a cat). After retrieving Enzo, the survivor learns from her of a drunken former airplane pilot named Sanchez who lives nearby. Sanchez turns out to be a drug smuggler who lost all his cargo when his plane crashed, and the survivor is forced to comb the entire archipelago for his scattered packages to secure his cooperation.

Along the way, the survivor finds Emily alive, but imprisoned, and frees her, reuniting her with Carol. The girl claims she was taken prisoner by a strange man whose face she never saw; her testimony, added to Carol's accusation of the same man being responsible for guiding the ship she was on onto the reefs, makes it evident that Kovac is not all he seems after all.

The survivor eventually gathers Sanchez, Carol, and Emily by the repaired seaplane. Sanchez wants to leave at once, but the survivor insists they fetch Ramon as well. However, not far from the plane the survivor is instead confronted by Kovac, who shows his true colors, claiming he does not want the survivor to leave as they have 'not finished their training'. He then sets the survivor a 'final exam' by attracting a massive zombie horde, which will have to be fought off while the plane starts up. Finally, after a grueling battle, the survivor manages to escape back to the plane, and it takes off with Kovac calling through a loudspeaker for the survivor to 'come back'.

How to Survive System Requirements

(0) Comments on "How to Survive Full Version"