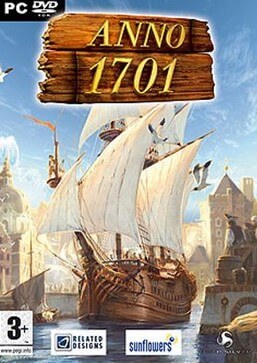 Anno 1701, also marketed as 1701 A.D., is a real-time strategy and city building video game, part of the Anno series. It is developed by Related Designs and published by Sunflowers Interactive Entertainment Software. It revolves around building and maintaining an 18th-century colony in the "New World". With a budget of €10 million, it was the most expensive German game ever produced by 2006.

Anno 1701, like the other six Anno games, is a game based mainly on the economics of the settlement created by the player. The more skilled a player is at maintaining a balanced economy the more successful their settlement will be.

As with other Anno games, the player starts as an unnamed country which has to colonize and expand in the game world. While the player expands, other computer controlled rivals are expanding and strengthening. As the player progresses through the game, players have access to lodge activities and troops which allow them to invade and ultimately to defeat other players.

The game is divided into five social stages: Pioneer, Settler, Citizen, Merchant, and Aristocrat. At the start of the game, all of a player's citizens are pioneers. They pay little amounts of taxes, and require only food and a town center. As a player's empire develops, so does his population. They begin upgrading (provided they have sufficient goods), paying more taxes, but also requiring more goods, such as tobacco products, perfume, lamp oil, and much more. It is crucial for a player to develop quickly, as not much profit is attained until reaching the merchant stage.

Players can trade with other opponents settling under the Queen's name, or with foreign cultures. All foreign cultures are on small or medium islands, and cannot leave their island.

Liang Wu and his Asians are found on islands in the north of the island world. They trade the colonial good Jade, and purchase food.

Poxacoatl and his Aztecs live on islands in the southern zone, are few in number and believe in the infinite power of the gods. They trade the colonial goods Talismans, and purchase cloth and horses.

Amin Sahir and his Indians have a small settlement on one of the islands in the southern end of the island world. Their Indian Ivory is a desirable colonial good.

Ramirez and his Pirates take refuge in expertly concealed hideouts in the southern zone of the island world. Due to their aggressive nature they take rich rewards from raids, therefore they can offer all colonial goods.

Anno 1701 is almost entirely focused on trade and economics, leaving little left over for war tactics. The combat has been simplified in some respects compared to the previous Anno game (Anno 1503), which makes it less involved and less difficult for new players.

1701 has a wealth of enhancements that distinguish it from its two predecessors, Anno 1503 and Anno 1602. These developments include:

Now, players are settling the island world in the queen's name. Thus, she expects subservience and respect. Late in the game, she will begin demanding for tribute, giving you the choice to pay thousands of gold coins, or being attacked by her royal fleet. Either option will eventually lead to independence. Different opponents have different relationships with the queen. Deciding to attack the queen can upset many honorable opponents, while paying tribute can upset others.