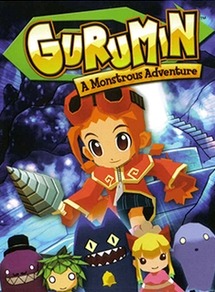 
Gurumin: A Monstrous Adventure, known simply as Gurumin (ぐるみん) in Japan, is an action role-playing game developed by Nihon Falcom Corporation. It was originally released in Japan on December 25, 2004 for Microsoft Windows. A PlayStation Portable version was later released in Asia on June 27, 2006, in Japan on June 29, 2006, and North America on February 12, 2007, published by Mastiff. A Steam version was also later released on March 30, 2015. A Nintendo 3DS port, titled Gurumin 3D: A Monstrous Adventure (known as Gurumin 3D in Japan), was announced on June 16, 2016 for release in North America on October 13, 2016 and Europe on October 27, 2016. The Nintendo 3DS version was released in Japan in November 2016.

Gurumin is a 3D Action RPG with heavy emphasis on action through real-time combat. Parin can acquire various headwear which have varying effects while equipped such as protection from water damage, stronger attacks or HP restoration. Each piece of headwear can be upgraded to increase their effects. Parin's drill has up to four power levels that are increased through combat or restoration points in levels and decreased by taking damage. The current level of her drill dictates damage that can be dealt and can change up and down frequently in each level. Various consumable items can be bought or found which are used during levels to restore HP or drill power.

Gurumin offers replayability by offering new difficulty levels upon completion of the game. The game starts with Beginner and Normal modes; Hard, Happy and Crazy modes are opened up with completion of the previous difficulty level. While each difficulty alters the strength of the enemies, some also change other elements of the game such as removing environmental hazards in Beginner mode, an altered game script in Happy mode (Japanese version only) and only allowing damaging of enemies through critical hits in Crazy mode.

In addition to headwear that gives characters various abilities and protection there is also a number of outfits that can be equipped. Matching the right outfit with the right hat could unlock additional abilities. These are acquired by purchasing from the (vending machine), completing the game at a set difficulty level, or through other means such as playing on the right date when a special event happens.

A girl named Parin goes to live with her grandfather in Tiese Town after her parents are called overseas on an excavation trip. After being told that there are no other children in Tiese, she finds what looks like another girl who is being threatened by a dog. Parin rescues the girl and discovers that she is actually a monster (お化け obake) which only children can see. To thank Parin, the monster takes her to a crack in the back wall of the town which is revealed to be a portal to the monster world. A group of monsters known as phantoms begin a series of attacks on Monster Village. Parin, who unearths a legendary drill, decides to fight against the phantoms and restore Monster Village.

The game received "generally favorable reviews" on both platforms according to the review aggregation website Metacritic. In Japan, Famitsu gave the PSP version a total of 31 out of 40. Subsequent reviews for the 3DS port have also been positive.