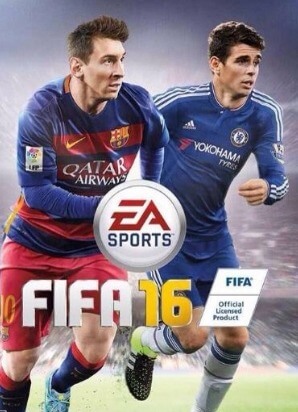 The game is the first in the FIFA series to include female players. It is also the first in which the players on the covers were chosen by popular vote, including one of the first three women to appear on the cover. Martin Tyler and Alan Smith are the commentators for the game.

The game contains 78 stadiums, including 50 real-world venues. Fratton Park, home of Portsmouth, was added to honour Portsmouth fan Simon Humber, creative director of the FIFA series, who died of cancer in 2015.

A new Training Mode was also added to Career Mode allowing the player to develop footballers in the team of which they are managing without actually playing them. These are in the form of skill games, a feature first added to the series in EA Sports' 2014 World Cup official game. It allows the player to set a specific focus on which the footballer should develop on meaning that he will grow specifically according to the chosen focus attribute. Doing this also increases the transfer value of the player.

New friendly enhancements were added to the mode with players now able to pick a friendly tournament before a season starts. Winning these friendly tournaments gives the player a reward in the form of a transfer budget boost. Also, unlimited substitutions are permitted when playing these friendly games. Other features include two-year loans, many realistic transfer budget enhancements and improved player values.

New features that are exclusive to the PlayStation 4, Xbox One and PC versions of the game involve a licensed presentation package for the Bundesliga, new weather and kick-off time variations, and the use of vanishing spray during certain matches. Downloadable content is available using a point system.

In addition to Tyler and Smith, commentary is once again provided by Alan McInally (in-game score updates), Geoff Shreeves (injury reports), and Mike West (Classified results for major leagues). Spanish and French commentary is also provided. Clive Tyldesley and Andy Townsend do not reprise their roles for international tournament play-calling, but return in FIFA 17 for World Cup and Euro Qualifier matches.

The Brasileirão wasn't included in FIFA 16 due to licensing issues. Instead, a handful of Brazilian teams were implemented into the ‘Rest of World’ section. New goal celebrations featured include Lionel Messi’s ‘1, 2, 3 hat-trick’ celebration – he looks into the camera while making the gesture, Tim Cahill’s ‘Timber’, and Olivier Giroud’s ‘Glamour slide’.

FIFA 16 was announced on May 28, 2015. The announcement of the inclusion of woman players was met with positive critical response from IGN. EA Sports' official trailer revealing the women's football feature was released on May 28 and included live and in-game footage of such players as Morgan, Leroux, Rapinoe, Abby Wambach, Hope Solo, Spain's Verónica Boquete (who had previously petitioned EA Sports through Change.org to include female players), England's Eniola Aluko and Steph Houghton, Germany's Célia Šašić, Canada's Christine Sinclair and Sweden's Kosovare Asllani.

The game was released in September 2015 worldwide for PC, PlayStation 3, PlayStation 4, Xbox 360, Xbox One, Android and IOS. A representative from publisher Electronic Arts confirmed that neither a PlayStation Vita version nor a Nintendo 3DS version of the game is in development, making FIFA 16 the first edition in the series since 2000 to not to be released on Nintendo platforms.

In September 2015, due to a warning by the National Collegiate Athletic Association (NCAA), 13 women's players that are currently attending or "likely to attend" an NCAA member institution will be removed from FIFA 16. The NCAA argued that the inclusion of these particular players would result in their forfeiture of eligibility to participate in NCAA-sanctioned competition, as NCAA rules strictly restrict monetary compensation to individual student-athletes. Whilst complying with the request, EA argued that they had licensed their likenesses through national governing bodies under "standard protocol", and that "none of these NCAA student-athletes or potential student-athletes were to be individually compensated by EA Sports for their inclusion in the game."