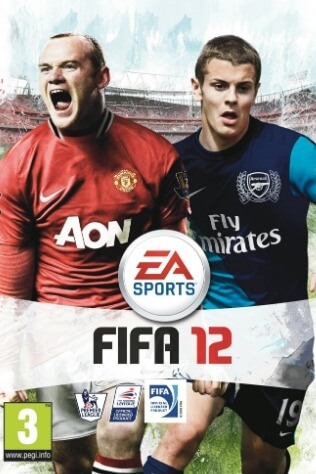 
FIFA 12 (titled FIFA Soccer 12 in North America) is the 19th game in Electronic Arts' FIFA series of association football video games. It was developed by EA Canada, and published by Electronic Arts worldwide under the EA Sports label. It was released in September 2011, on consoles for PlayStation 3, Xbox 360, Wii and PlayStation 2; on handhelds for PlayStation Portable, 3DS, Xperia Play, Android, and iOS; and on computers for Microsoft Windows and Mac OS X. A port of the game entitled FIFA Football (titled FIFA Soccer in North America) was released as a launch title for the PlayStation Vita.

David Rutter, the line producer for FIFA 12, promised "a revolutionary year for FIFA ... especially in the gameplay department."

In the United Kingdom, an "Ultimate Edition" of the game was available at Game and Gamestation stores. It included four monthly Ultimate Team gold packs, with each pack containing 12 items, including players, contracts, stadiums, managers, staff, fitness, healing, footballs, kits and badges. Each pack contains one rare item, such as enhanced player attributes, longer contracts and the most coveted players. On 22 June 2011, EA Sports announced that the Microsoft Windows version of FIFA 12 will have the same engine, features, and competitions as the PlayStation 3 and Xbox 360 versions.

Along with several other new EA Sports titles, FIFA 12 was available three days early to purchasers of the EA Sports Season Ticket.

The release date of the FIFA 12 demo was announced at the Gamescom event in Germany on August 16, 2011; the demo was available from Xbox Live Marketplace and EA's Origin Store for Microsoft Windows on 13 September 2011, though the PlayStation 3 demo was not available in Europe until the following day.

Three major gameplay changes have been implemented in FIFA 12; these are the Impact Engine, Tactical Defending, and Precision Dribbling.

In development for several years, the Impact Engine improves collision variety, accuracy, and momentum preservation. A new advanced procedural animation system is used along with collision physics to produce different results depending on the players and physical forces involved. This affects all players, so even those off the ball may have collisions. The Impact Engine has been cited as a game changer, making FIFA 12 less structured and synthetic than its predecessors, and has been described by producer David Rutter as the biggest technological change to the series since the transition to the current generation of consoles. The Impact Engine also directly affects injuries sustained by players during a match.

The new Tactical Defending system aims to change the approach to defending by placing equal importance on positioning, intercepting passes and tackling. When defending there will be more of an emphasis on slowing attackers down and containing them, and pressuring them into making mistakes. This is intended to be a more manual form of defending, requiring greater timing and precision when compared to the defensive "press" system used in previous FIFA games. The old system, now dubbed "legacy defending", where a button press causes an AI player to home in on the player in possession of the ball, can still be used offline, and in online friendlies and custom unranked matches.

The Precision Dribbling feature allows players to dribble whilst shielding, meaning that the player can still move around the pitch whilst holding players off, rather than being rooted to the spot. Close control has been added below jogging as a way of allowing players to take smaller, more frequent touches, keeping the ball closer and keeping tighter control. Players will now be much more aware of their surroundings. As an example, players in possession near the touchline will understand their position, and keep tighter control of the ball to stop it running out of play.

An improved artificial intelligence system named Pro Player Intelligence aims to make AI-controlled players react to the skills and capabilities of other players with appropriate actions. For example, a winger will be more likely to cross the ball into the box when he has a waiting teammate with aerial ability, whereas he might look for support and play the ball along the ground if that teammate is less of an aerial threat. Players will also make better use of their own strengths, so for example a creative player might look for less obvious opportunities such as playing long accurate passes, where another player in his situation would be more likely to play it safe with a short pass.

Match presentation has also been overhauled with a new default camera angle and improvements to the broadcast-style match build-up. Some in-game cutscenes have been removed, such as those before throw-ins and corner kicks. Instead, a player will simply run to perform the task in question with no interruption.

The manager's relationship with players and the media will play a larger role, with team selection, success, and salaries all affecting individual players' attitudes and morale, and the press picking up on injuries and unrest, all of which can impact performance on the pitch. Unhappy players can talk to the press and stir up interest from other clubs, with transfer AI also having been improved upon. Transfer targets will sometimes demand excessive wages if they think they can get away with it, and rival clubs will attempt to steal players away for a bargain price. Each club will be assigned a particular transfer mentality, where the richest clubs will tend to concentrate on acquiring the very best players available, whereas smaller clubs may look more for youngsters, older players, and loans. The AI will fine-tune this element to prevent it becoming too predictable. The transfer window has been overhauled, with the last day being slowed down to progress on hours rather than days and featuring a ticking countdown clock as clubs hurry to complete last-minute deals. It will be possible to delay transfers until right up to the deadline in order to see how others pan out, and the club's Chief Executive will help with pointing out potential late signings. Other improvements to Career Mode include the calendar, news story displays and news feeds, which aim to make information such as upcoming events, transfers, and rumours more accessible. Facebook integration has been implemented.

EA claims to have "revolutionized" the online side of FIFA 12. Among the changes is a new mode called "Head to Head Seasons", a variation on regular ranked matches where league points are awarded for winning or drawing matches. The aim is to progress up through ten divisions, with each "season" consisting of ten games. All players will start in the tenth and lowest division, with promotion and relegation based on a target number of points won in each season. Multiplayer matchmaking has been expanded with the addition of the "flow" mode. This involves choosing various options such as team and line-up before being matched with an opponent. This change is intended to counter the problem of being paired with opponents who choose one of a small number of five-star teams, a situation that often results in repetitive matches between the same few clubs. By selecting a team beforehand, an opponent with similar team preferences will automatically be chosen. There is also the option for players who use the "manual" control method, with reduced AI assistance on shots and passes, to choose to be paired against other "manual" users only. The percentage of games an opponent has finished can be specified too, making it easier to avoid "rage quitters".

A new online service called EA Sports Football Club launches simultaneously with FIFA 12, and has been compared to a social network that tracks what players do in the game and awards XP. This will be linked to both friend-based and worldwide leaderboards, and include a levelling system. The player also chooses a particular football club to support which will be apportioned a share of all XP earned, with league tables for clubs based on the average XP contributed by their fans. Each week will count as a "season" with clubs being promoted or relegated based on the skill of those who support them. EA Sports Football Club will in future connect play across multiple titles, starting with FIFA 12 and the forthcoming FIFA Street. By playing both games, XP earned in one will be carried over to the other.