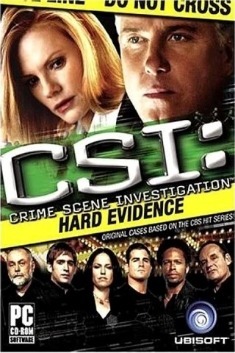 
CSI: Hard Evidence is a computer and Xbox 360 game based on the CSI: Crime Scene Investigation television series. This is the fifth CSI game released, including CSI: Miami.

As with the previous CSI games, there are five cases to work on. However, the game includes improvements on CSI: 3 Dimensions of Murder, like a 3D crime scene kit. The voice of Sara Sidle is again performed by a soundalike (Kate Savage) and not Jorja Fox. Catherine Willows is also replaced by a soundalike in this game, with Edie Mirman standing in for Marg Helgenberger.

Case 1: Burning For You

In the first case, a taxi driver has been killed in an apparent arson attack inside his car. The player works with Nick Stokes in this case.

During the investigation, the victim was found to be a racist with a criminal record. The details pointed out to a homeless man from Arizona, and two women who are in a relationship, one of them was the victim's old high school prom date and being harassed by him for two weeks.

A woman is repeatedly stabbed in her house and lives, but doesn't know who hurt her. The player works with Catherine Willows in this case. The husband is initially suspected after the woman is found to have entered into a contract with an aging African-American tycoon to be the surrogate mother for his son. However, after discovering that the husband was oblivious of the arrangement, the only suspects are the tycoon and his trophy wife. This case can also be played as the sixth case of the PlayStation 2 version of 3 Dimensions of Murder.

The bodies of four members of a rock band called Bullet Train, are found electrocuted. The player works with Warrick Brown in this case.

The band members each have a record, except for the young singer. The suspects are the band's roadie/sound-tech, who was picked on by the band, his current lover, who is the band's second choice for a singer, the band's hateful manager, and Bullet Train's ex-singer, who was also the ex-wife of the lead guitar player.

Case 4: In Your Eyes

An eye surgeon originally from India was brutally killed in his own home. The only witness is his blind wife. After realizing the wife's alibi has holes in it, she becomes a suspect along with the victim's daughter and his partner at work, who the victim was forcing his daughter to marry. The player works with Greg Sanders in this case.

There has been a gun shootout where lots of bullets have been found, and a store clerk is shot repeatedly. A man found at the scene of the crime admits to killing the clerk, but evidence soon suggests the work of the man's brothers, of whom all three are triplets. The case includes characters from the "Shock Rock" case. The player works with Gil Grissom in this case.

CSI: Hard Evidence was met with mixed reception from critics, with reviewers citing repetitive gameplay and a lack of challenge as the main areas of weakness. It was also pointed out that little attention was given to implementing interesting achievements for the Xbox 360 version. GameRankings and Metacritic gave the game a score of 69% and 63 out of 100 for the PC version; 44% and 48 out of 100 for the X360 version; and 52% and 49 out of 100 for the Wii version.