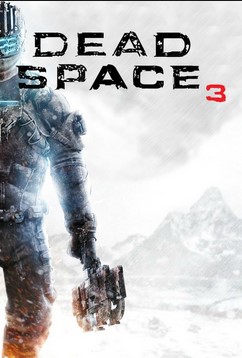 
Dead Space 3 is a survival horror action-adventure video game developed by Visceral Games and published by Electronic Arts. Announced at E3 2012 and released internationally in February 2013, it is the sequel to Dead Space 2. It is the third main entry in the Dead Space series.

In Dead Space 3, Isaac Clarke teams up with EarthGov Sergeant John Carver as they travel to Tau Volantis, an ice-covered planet, to end the Marker and Necromorph threat for good.

Development of the game began after the completion of Dead Space 2. It is the only game in the Dead Space series to feature online co-op.

The game received positive reviews from game critics upon release; reviewers praised the game's rewarding action gameplay, although criticism was directed at the focus on action over horror, as well as a weak and unfocused story compared to its predecessors. Despite poor sales, EA and Visceral expressed interest in a sequel. However, with Visceral Games being shut down in 2017, and no confirmation that a new installment in the series is being developed by a new studio, this now seems unlikely.

Dead Space 3 puts Clarke against the Necromorphs, who serve as the primary antagonists of the franchise. The Resource Integration Gear (RIG) suit returns, using holographic displays projected from the players' suit and weapons to display health and ammo count, respectively. In vacuum areas, a timer will appear on the player's right shoulder, indicating how much oxygen that character has left before they suffocate.

Player characters can roll and take cover to avoid attacks. This ability was described by a Visceral Games developer as essential, as it "felt dumb/terrible not to have it" and that they have been "making Isaac more responsive", as they "want the horror to come from the terrible things that happen in the game; not from the horror that something is moving slowly towards you and you can't shoot it because the game controls like a piece of crap." The cover system is also described as "organic" in nature; for example, the player does not need to "walk up to certain tagged things and press the cover button; Clarke ... just does the action that is appropriate for the given situation."

Aside from the returning Necromorphs, Dead Space 3 features a large cast of new enemies. One example is the Fodder, whose attacks change depending on how it is dismembered; while another is the Nexus, an insect-like giant that can crush or swallow people whole. Other obstacles in Dead Space 3 include a new human enemy, Unitologist soldiers; and environmental hazards like falling machinery and a giant mining drill.

The Bench weapon upgrade system from Dead Space and Dead Space 2 has been redesigned as a new upgrading system called the "Weapon Bench". Here, players are able to construct new weapons from parts gathered throughout the game. The bench provides two main frames to start with—a light one-hand frame and a heavy two-hand frame—and players can build new weapons and put two weapons together (for example, a plasma cutter and a flamethrower). Examples of weapon functions include an electric rivet gun and an incendiary buzzsaw launcher. If a player does not want to build a weapon from scratch, they can choose from ready-made blueprints, including classic Dead Space and Dead Space 2 weapons. Built weapons can also be shared in co-op mode.

Dead Space 3 has a drop-in/drop-out online co-op mode for its campaign, which was announced at Electronic Arts's E3 2012 press conference, stating that it will unlock "additional story details and gameplay mechanics only found when playing as the co-op character, EarthGov Sergeant John Carver." When a second player joins the hosting player via Xbox Live, they step into Carver's shoes. To facilitate this, the game is written in such a fashion that Carver can either accompany Clarke or stay with the other non-player characters, and seamlessly transition from one role to the other, without having any effect on the plot.

Carver's presence unlocks three co-op-only side missions, mostly concerning Carver's past as an EarthGov soldier, his troubled relationship with his wife and child, and his guilt over their deaths in a Necromorph outbreak. Additionally, each player has alternate experiences as a result of their characters' dementia. For example, the player controlling Carver will find toy soldiers in a biology facility, while the player controlling Clarke will not see them. Co-op also puts the players in separate situations: when Carver tries to open a certain door, he suddenly becomes trapped in his own mind (echoing a similar situation in Dead Space 2). Clarke must protect him from a sudden surge of Necromorphs until Carver can free himself.

A Visceral Games employee has confirmed it was "always intended to have co-op in Dead Space", citing co-op supporting game System Shock 2 as a source of inspiration for the Dead Space series. He also pointed out that if the player chooses to play alone, Carver "may appear at some points (as do other non-player characters) but for the most part he is not there."

Like the other titles in the Dead Space franchise, Dead Space 3 takes place in the 26th century. Mankind has colonized the stars but is in desperate search of new energy sources. One potential method was found in the Chixulub crater on Earth: an extraterrestrial artifact, dubbed the "Black Marker", which produces a constant electromagnetic field in defiance of the law of conservation of energy. Though human scientists hoped to harness the Black Marker for its unlimited energy potential, they soon discovered that the purpose of its field is to re-animate and mutate dead flesh, resulting in outbreaks of "Necromorphs". EarthGov immediately shut down the project, but a number of Red Markers, reverse-engineered copies of the Black Marker, had already been created and needed to be hidden; even worse, one of the project's lead researchers, Michael Altman, went public with it, promising that the Markers were sent to "make us whole" through a process called "Convergence". A religious movement, Unitology, seeks the Markers in the hopes of unlocking salvation. Isaac Clarke (Gunner Wright), the protagonist of the franchise, has already survived two outbreaks of Necromorphs, as chronicled in the first two installments of the series. He is joined in this game by Ellie Langford (Sonita Henry), who also survived the second game, as well as two EarthGov soldiers, Capt. Robert Norton (Robert Gant) and Sgt. John Carver (Ricardo Chavira), in an attempt to end the Necromorph threat once and for all.

All games from the serie "Dead Space"