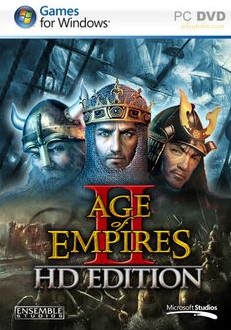 Age of Empires II: HD Edition received mixed reviews with aggregate review website Metacritic assigning a score of 68 out of 100 based on reviews from 20 critics. Critics agreed that the HD Edition changed very little from the original game. Daniel Starkey of Destructoid added that the reluctance to change the game features encourages "a much more aggressive, and obsessive style of play". He highlights the fact that many of the problems of trying to run the original game on a modern computer are gone, and calls its compatibility with Steam's Workshop "an amazing bonus".

Paul Dean of Eurogamer was less forgiving; although he agreed that the Workshop compatibility was a good addition and praised the players in the online community as "remarkably calm and friendly", he thought that the game should have been updated more, citing its "boring campaign" and poorly-aged gameplay mechanics: "It just doesn't play very well, and its flaws are more blatant than ever before". Underscoring his criticisms of the lack of significant changes to the game, he described it as "a mouldy time-capsule that will likely mar your memories of the original".