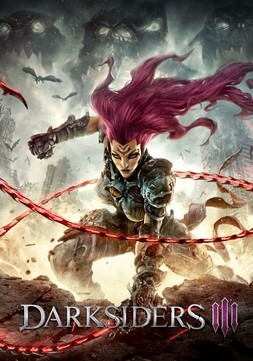 Darksiders III is a hack and slash action-adventure video game developed by Gunfire Games and published by THQ Nordic for Microsoft Windows, PlayStation 4 and Xbox One in 2018. It is a sequel to Darksiders II and the third entry in the Darksiders series.

Darksiders III is an action-adventure game with Metroidvania gameplay elements. Players take control of Fury, sister of War and Death, two of the Four Horsemen of the Apocalypse, from a third-person perspective. Fury, a mage who is described as the most unpredictable and enigmatic of the Four Horsemen, relies on whips, swords, flails, daggers and magic in combat. Fury can take on multiple different elemental forms in order to enhance her combat capabilities by granting her new weapons, attacks and traversal abilities.

Enemies are stronger than in previous installments, but appear in smaller numbers during encounters, so as to make battles feel more personal. Some enemies from previous games returns, while other foes are new. Gated combat is not a feature, in an attempt to make everything within the setting contextualized and interconnected. The game takes place in a continuous open world environment where exploration plays a large role. While exploring, Fury must solve puzzles and overcome platforming obstacles, some of which make use of her whip. Such puzzles include using bombs and the Flame Form to blow up obstructed pathways and materials in the environment.

Darksiders III features a levelling system and a crafting system. Similar to War, yet dissimilar to Death, Fury collects souls from enemies and from objects in the environment, as a form of currency or an expendable resource. According to the developer, the threats of the game's world will grow stronger as the player progresses through the story, matching Fury's power every time a Deadly Sin is defeated.

Taking place parallel with Darksiders II and happening before Darksiders, Fury, one of the Four Horsemen of the Apocalypse is summoned by the Charred Council and tasked in finding the Seven Deadly Sins; one of the Watchers accompanies her on her quest.

Upon arriving on a war torn post-apocalyptic Earth, Fury encounters the first of the sins, Envy. Upon Envy's defeat, Fury steals a talisman and uses it as a prison to hold Envy alongside the other sins she would encounter. Not long after, she finds her way to a tree named Haven where she encounters Ulthane, who is a previous character from Darksiders 1, and some surviving humans of the apocalypse. Ulthane tasks Fury with sending any Humans she finds to Haven. She then leaves to find the next sin which is Wrath and Ulthane provides the location for him. Upon arriving to fight Wrath, he is engaged in fighting and killing angels. When she nearly kills Wrath, she summons her horse Rampage which gets killed by a mysterious, angelic weapon. Out of anger, Fury loses focus and Wrath stabs her while he taunts her. With her dying breath, she takes the blade in her gut and uses it to stab Wrath in the face but he does not die due to the fact that he was not imprisoned in the Talisman of sin. As Fury laid dying on the ground, a fiery portal takes her to the Lord of the Hollows. The Lord of the Hollows is a powerful entity within the Hollows that helps Fury in her quest to destroy the Seven Deadly Sins who wields the power that enables both weary Angels and Demons from the endless war, to a complete release from the cycle of life, death and rebirth of the Well of Souls. The Hollow Lord aids Fury but his own goals remain unknown. The Hollow Lord attempts to inform Fury that she is being manipulated by the Charred Council for their machinations, going so far as to call her ignorant and blind to their plans and lies. Though Fury denies it, the Lord of the Hollows nonetheless aids her by giving her the powers of elemental hollows (to enhance her combat abilities) and instructs her to hunt down the demon Abraxis and return to him with the demon's soul in tow.

As Fury takes on one sin after another, the Lord of Hollows continues to endow her with new hollows to aid in her mission. When she makes it to Abraxis' stronghold, Fury wants to know why the Lord of Hollows wants Abraxis dead. Abraxis tells Fury that a new dark lord is coming and he's only known as The Destroyer. The demon explains that the Lord of Hollows intends to hollow the mortal realm to install a new order. Since this is a choice in the story, if you choose to believe in Abraxis, the demon will thank and welcome you to his master's home anytime. Once you make it back to the Lord of Hollows, you'll still have the choice to face him in combat or choose to believe him. If you follow through for Abraxis, the Lord of Hollows will simply be killed. However, if you agree to believe the Lord of Hollows and face Abraxis, you'll kill him and take his soul as the prize. In which the former'll reveal details of his own past and the councils corruption. Of how the Lord of Hollows was once a welcome delegate seated at their table, but he soon grew disillusioned with their obsessions and half-measures in enforcing the balance; only monitoring the first and second kingdoms while leaving the third to fend for itself. Culminating in pleading ignorance when in truth they let mankind be devastated by the premature apocalypse on their watch. Going onto explain his hollowing of souls and entrusting his will to Fury was his way of making amends for an eternity of inaction before ending his own life, all while leaving a new item behind for players to use in the future.

All games from the serie "Darksiders"